Once again, I have embarked upon my Annual Fall Tiger Beetle Trip, this being the ninth consecutive year that I have done such a trip. Unlike previous editions, however, the quarry on Day 1 (Sept. 15) was not a tiger beetle but a longhorned beetle. Ataxia hubbardi is not uncommon in the eastern and central U.S. and breeds in the living tissues of a variety of herbaceous plants, but especially certain species of Helianthus, Ambrosia, and Silphium in the family Asteraceae. I was hoping to see a distinctive population of this beetle that is associated with prairie dock (Silphium terebinthinaceum) in the dolomite glades just south of St. Louis. This population is interesting because individuals are smaller, darker, and narrower in form than is typical for the species, and I would like very much to get some photographs of the adults, which seem most abundant in the fall, on the tall flower stalks of their host plant. 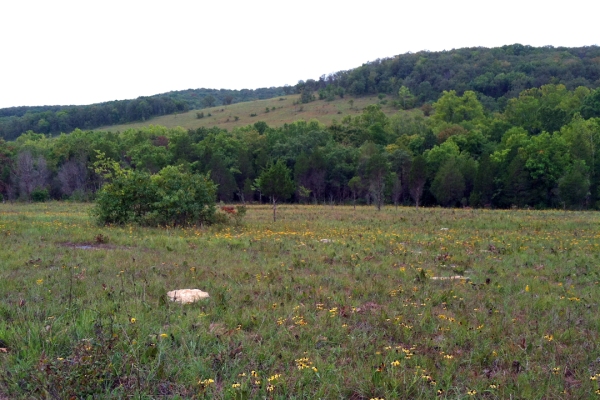 I first discovered the population many years ago—back in the 1980s when I visited one particular glade, Victoria Glades Natural Area, almost weekly over a period of several years. I left Missouri for a few years in the early 1990s but returned in 1995, and during my absence fire was implemented in Victoria Glades and other glades in the area as a management practice for controlling invasion by woody plants (primarily eastern red-cedar, Juniperus virginiana). While the use of fire has certainly done much to restore the glades and improve its floral diversity, it seems more than coincidental that insect abundance and diversity on the glades is only a fraction of what I observed during my pre-burn collecting in the 1980s. There are a number of beetle species that I found at the glade historically that I have not seen now for more than 20 years; one of which is this distinctive population of A. hubbardi.

The prairie dock plants were at the height of bloom, but the flower stems seemed shorter and the normally large, spatulate basal leaves of the plants generally smaller than typical—perhaps a result of this summer’s severe drought. How such conditions affect the beetles is unknown. The day was also rather cool due to unbroken cloud cover and light drizzle, with temperatures in the low 70s during my visit. I spent the better part of two hours inspecting the stems of every prairie dock plant that I encountered and did not see a single beetle, so it has now been 23 years—almost a quarter century—since I’ve seen this once fairly common species at the glade. Can I prove that fire management has extirpated the beetle? No—populations might have been knocked down by the drought, or maybe the adults hide on cool, cloudy, drizzly days. Still, the pattern is too consistent to ignore, and I become increasingly worried that a special feature of these glades has now been lost. 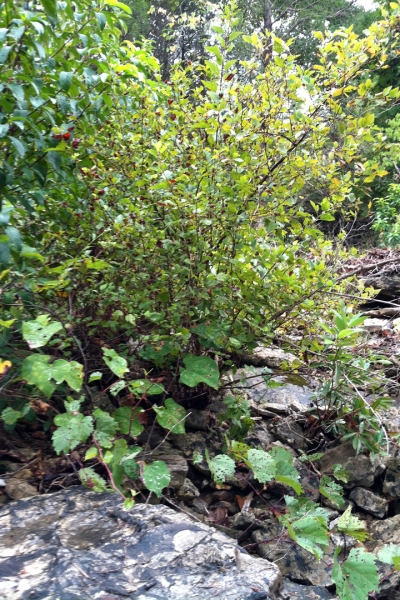 On the other hand, another quite rare beetle that I encountered abundantly at Victoria Glades in the past seems to have rebounded from its long absence—the jewel beetle Dicerca pugionata. This beautiful beetle is associated with the scraggly clumps of ninebark (Physocarpus opulifolius intermedius) that hang on in the moist toe slopes of the glades. I wrote about this species earlier this year after re-discovering it in the glades; however, I couldn’t resist taking a few more photographs of this stunningly gorgeous species. This species also makes its appearance in the fall as well as spring, and in the two hours I spent searching I counted 13 beetles—more than I’ve ever seen on any one day. Interestingly, most of these were associated with a stand of plants in an area at the south end of the glade that I had never searched before and that appears not to have been subjected to fire management (cedar removal has been effected instead with a chain saw). Only a few of the beetles were found in the much more abundant plants growing in the area of the glade I am more familiar with and that has obviously been subjected to repeated burning. It’s not proof, but I’m just saying… 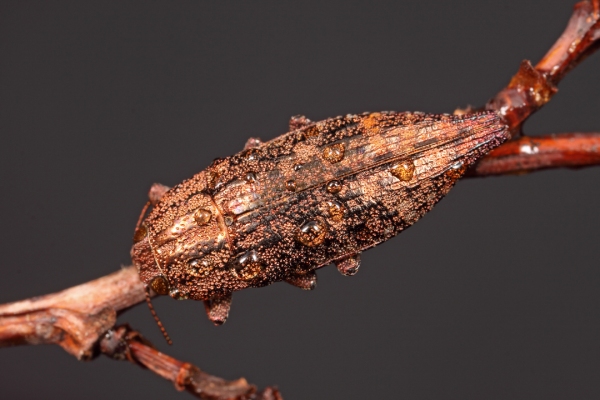 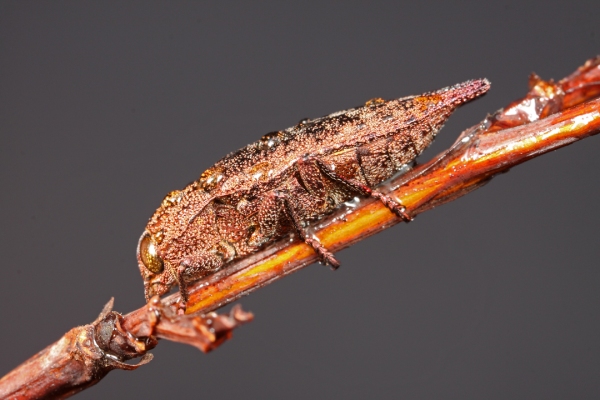 Adult beetles are colored almost precisely the same as the bark of their host plant.

More even lighting in this face shot compared to my previous attempts.

The cool temperatures and light drizzle were not conducive to much other insect activity, but while crossing the small, shallow creek that separates the south end of the glade from the main glade, the biggest male tarantula (Aphonopelma hentzi) that I have ever seen caught my attention as it crossed the creek. Situated only 30 miles south of St. Louis, Victoria Glades must represent the northeastern limit of distribution for the species, and although I once saw a tarantula crossing the road very near to this location, this is the first tarantula that I have actually seen in the glades that lie so close to St. Louis. Males are famous for their fall wanderings, presumably in search of the females that tend to stay within their burrows. This male was missing part of one of its hind legs but otherwise appeared quite healthy and robust. I hope he succeeds in finding a mate and sires many offspring and is not discovered by any of the poachers who regularly scour the glades and steal its more unusual inhabitants—the glades have already lost enough of their unique residents… 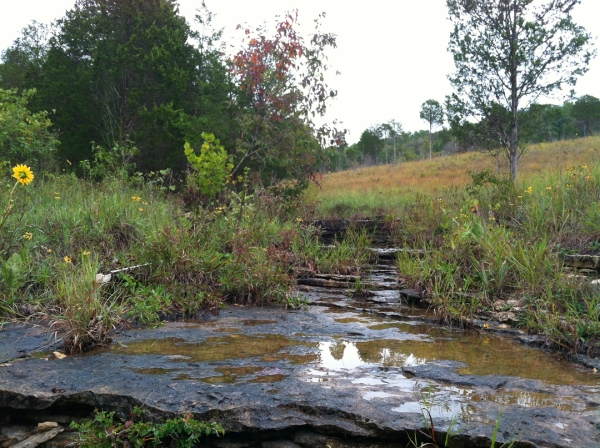