Update 10/7/12, 10:41 a.m.—Thanks to Ben Coulter, who pointed out my rather silly misidentification of these beetles that actually represent Cicindelidia ocellata rectilatera (Reticulated Tiger Beetle). I have only my failure to even consider the possibility of a southwestern species to blame for the error, as the evidence was staring me right in the face (the lack of any trace of lateral connecting band and, most obviously, the reddish parts on the underside). No wonder the habitat didn’t seem quite right! I was not aware of the occurrence of this species east of Texas, so I’ll have to dig a little bit to see if this is an unusual record. Pearson et al. (2006) show the northeastern limit of distribution coming very close to but not actually reaching the southwestern corner of Arkansas, and the closest records given by Graves & Pearson (1973) are in western Louisiana and adjoining Texas. It would be immensely rewarding should this turn out to be a new state record (though there are many sources still to check to confirm this)—not to mention the irony of it in view of the post title (call it a double “er, wait a minute”!). At any rate, I should have been a lot more excited when I saw it than I was.

After a fun-filled day of photographing the Limestone Tiger Beetle in northern Texas, it was time to start working my way back to Missouri. I had one last goal that I wanted to accomplish before spending my last day in our state’s White River Hills, and that was to find and photograph the unbelievably gorgeous Cicindela formosa pigmentosignata. Dubbed the “Reddish-green Sand Tiger Beetle” by Erwin & Pearson (2008), this brilliant violaceous and nearly immaculate subspecies of the Big Sand Tiger Beetle is restricted to sandy areas of open pine forests in eastern Texas, southwestern Arkansas, and northwestern Louisiana (Pearson et al. 2006). I had a few specific localities that I’d gleaned from colleagues and the literature and targeted the two “best” (specificity of location, recent occurrence, and reasonably “on the way” back to Missouri) for Day 7 of the trip. The first site in Texas looked perfect—deep, dry sandy 2-tracks leading through open pine/oak forest, and I was actually surprised when I’d searched a mile or so of track and hadn’t yet seen one (the habitat just looked that good). Still, I spent quite a bit more time searching, thinking that numbers could be low and it might take such an effort. Sadly this was all in vain, and the time came to give up and try again at the second locality in Arkansas. The story was largely the same at this second locality also, and by late afternoon I had come to accept that this was one challenge that I was going to lose (for now at least).

As I searched one bit of potential habitat at the Arkansas location, I noted the presence of Cicindela repanda (Bronzed Tiger Beetle). This species is dreadfully common throughout much of the eastern U.S. in just about any near-water habitat, which told me I was probably too close to water to find the higher, drier-ground preferring Big Sand Tigers. I’ve seen millions of C. repanda through the years (this may not be an exaggeration), and since they show so little polytopism (geographically-based variation), at least in the parts of its distribution that I have visited, I hardly pay them mind anymore. As I was walking, however, something caused me to take a closer look—some of them didn’t seem quite “right.” Of course, you can’t just walk up to a tiger beetle and stoop down for a good look at it. Stalking is required, usually of several individuals before finding one that you can approach closely enough to see the necessary characters, and when I did this I realized most of the C. “repanda” I was seeing were actually a different species—Cicindela duodecimguttata (12-spotted Tiger Beetle)!

Even tiger beetles get bored during sex—this female preening her antennae seems oblivious to the male engaging her.

I get the impression from literature sources that 12-spotted Tiger Beetles are quite common further east, especially in the northeastern U.S. and southeastern Canada. However, here in the central U.S. they are not commonly encountered. In fact, these are the first of the species that I have seen since I began photographing tiger beetles more than 3 years ago. In Missouri the few instances that I have seen them were along creeks and small rivers with banks composed of sand and a fair bit of dark clay. This makes sense, given their generally darker coloration compared to Bronzed Tiger Beetles, and it is this character that first stands out amongst the hoardes of C. repanda with which it usually co-occurs.  Once the darker coloration draws the eye, the markings of the elytra—reduced and broken into six spots (usually) on each one—confirm its identity. Despite the similarity of appearance to C. repanda, this species is actually more closely related to Cicindela oregona (Western Tiger Beetle), an exceedingly common species found from the Rocky Mountains to the Pacific Coast and north deep into Alaska. In fact, the two species are so closely that they have formed a hybrid zone where they come into contact along the front range of the Rockies—one could almost argue that they are only subspecifically distinct because of this.

A male pauses briefly while hunting for prey (or mates).

That I found them in this particular habitat was a bit of a surprise to me. I mentioned that in Missouri I’ve seen them on darker creek and river banks, but the creek bank at this location was quite lightly colored and seemed to consist almost entirely of sand. There were a few C. repanda mixed in with this small population. In all, it was a welcome consolation prize that made up for not finding C. formosa pigmentosignata—sort of! 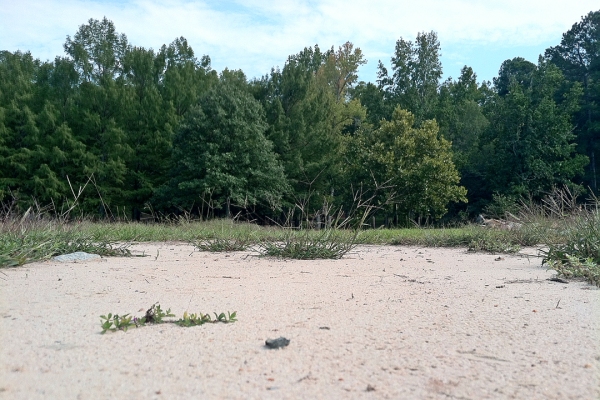