I recently happened upon these photographs of Habroscelimorpha severa (Saltmarsh Tiger Beetle), taken in early August last year at the terminus of Florida’s famous “Road to Nowhere“. I hadn’t thought to post them afterwards because I’d already shown a photograph of this species taken at the same spot during the previous year’s visit. I should have, as they are much better photographs than that initial attempt. Blame part of the first attempt on the fact that I was only in my third month of insect macrophotography, but the biggest reason for the improvement was because I’d gotten a little smarter and learned to use a blacklight to bring these extremely wary beetles to me at night rather than try to chase after them during the day. Still, I don’t get much enjoyment out of posting photos for no other reason than to post photos, so they’ve sat on my hard drive for the past year and a half. In looking at them again, however, I realized that the first and second, profiles of a female and a male, respectively, make for a nice comparison of the secondary sexual characters exhibited by adults of this species. 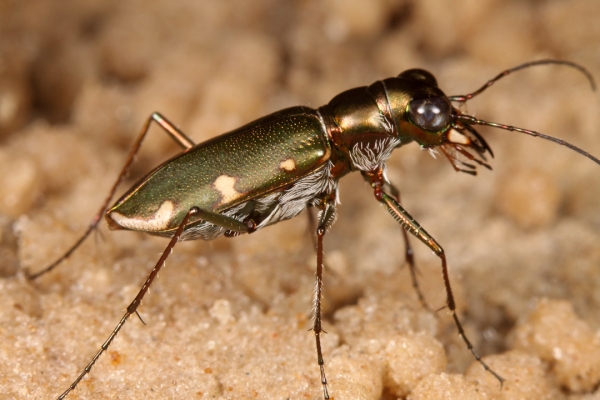 Females exhibit fewer sexual characters than males, the main one being the presence of grooves on each side at the back of the pronotum (neck). These grooves function during mating, at which time the male grasps the female by the pronotum with his mandibles. This helps to provide a more secure grip for the male to prevent him from being dislodged during mating and subsequent mate guarding. The grooves themselves are not obvious in the photo, but the lack of setae (hairs) within them is, giving the female a less “hairy” look than the male. As with most insects, females also are more robust—their abdomens larger to make room for egg-making machinery, although in this and other tiger beetle species the difference is not that obvious.

Males are immediately recognizable by several respects. In addition to the smaller abdomen and “hairier” pronotum lacking lateral grooves, male tiger beetles in most of the “higher” genera exhibit brush-like pads on the undersides of the front tarsi (feet). The function of these pads is not completely clear, but prevailing opinion is that they somehow aid in gripping the female during mating. I’m not sure I buy into this—males do sometimes hold onto females with their front legs during mating, but how these pads improve grip escapes me. Further, it is my experience that males actually spend more time during mating and mate guarding with their front legs outstretched to each side. I’ve also noticed that males are reluctant to release females even when danger approaches (even in the form of a giant insect macrophotographer). I’ve seen males tenaciously clinging to the female as she violently tries to shake him off and flee from my approach. It makes me think that perhaps the tarsal pads serve some tactile function as a final warning of impending danger to a grasping male, allowing him to not give up his female until absolutely necessary (hey, it’s an idea—if you have an alternative idea I’d love to hear it). There is more, however—look at that big head!

Actually,  the male’s head is no larger than the female’s, but the proportionately longer mandibles give the male a distinctly “big-headed” look.  In contrast, the labrum (upper lip) is shorter than the female’s (making the mandibles look longer still). Both of these characters are, again, related to the habit of grasping the female pronotum, with the longer mandibles allowing a more secure grip of the female pronotum and the shorter labrum adding even more functional length to the mandibles (I can also imagine that this might have some effect on choice of prey by males versus females). The male mandibles also have a greater amount of white coloration at their bases—this might simply be a function of the relatively larger size of the mandibles, but given that males of many species exhibit more white overall on both the mandibles and the labrum (the latter of which is usually smaller), it seems more logical to me that the white coloration serves as a visual cue for potential mate recognition.

“Yeah, well your white lips aren’t so bad either.”