This is not only the hardest ID Challenge I have ever posted, it is probably the hardest one anyone has EVER posted. I’m not going to ask for order or family because they’re so easy. I will ask for the genus, because maybe only a few of you will get that right, but the genus alone won’t be enough. I want the species! Don’t even think about searching the internet for a matching photo—it doesn’t exist! You’re going to have to utilize other resources to figure this one out.

Because of the difficulty of this challenge, all the normal rules are out the window—no points, no sessions, no moderated comments, no nothing. This is winner take all—first person to correctly guess the species gets loot! I’ll even provide all the collection data in the caption. Good luck!

Update 10/29/12 10:12 pm: Well, I goofed and didn’t think about somebody Googling the label data, which Ben Coulter did to quickly arrive at the correct answer. Stupid Google!

At any rate, and with great anticlimactic fanfare, say hello to Aneflomorpha cribellata, described by Bates more than a century ago (1892) and known only from that single type specimen until the collection of this one in southern Mexico in 2005 (MacRae et al. 2012). This is the first photograph of the species and will be added to Larry Bezark’s A Photographic Catalogue of the CERAMBYCIDAE of the World. 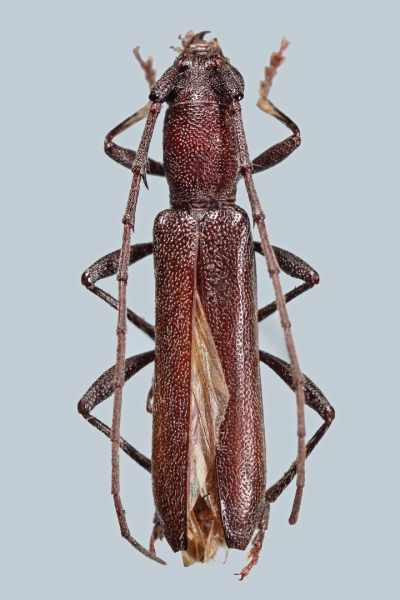 10 Responses to The hardest EASIEST ID Challenge in like ever!