It has been a long time since I initiated my Beetle Collecting 101 series (more than two years!), and to date the first issue—Beetle Collecting 101: Dress for Success—remains the one and only lesson that I’ve posted. I really had intended to follow that up with nittier-grittier posts on the actual mechanics of collecting beetles and processing the specimens for long-term preservation, but I didn’t and don’t know why other than to say, well… life happens. It’s never too late to fix something, however, so as a long overdue follow up I thought I would give a short video lesson on how to pin a beetle—specifically a cerambycid (longhorned) beetle. Featured in this short (4:31) video is the lovely Megacyllene decora (amorpha borer), which I found back in early September at a site in Missouri’s southeastern lowlands. Click the image to be directed to the video. 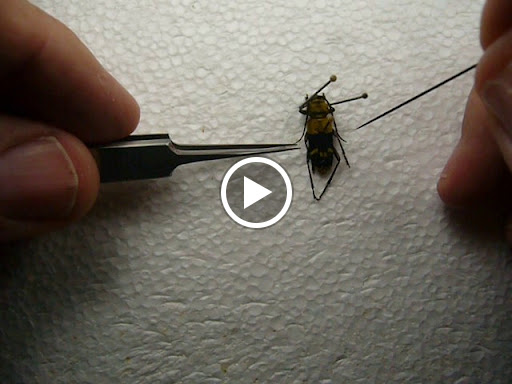