I have a small collection of velvet ants (family Mutillidae) that I’ve accumulated over the years—not through active collection but more as bycatch from my beetle hunting operations. Velvet ants are, of course, not ants at all, but wasps, and as such the females are—like their winged relatives—quite capable of delivering a painful sting if mishandled. They also tend to be seen running rather frenetically across the ground, making them difficult to guide into a collection vial or grab with forceps. You’ve gotta really want ’em if you want to collect them. Still, even though I don’t study them I find them interesting enough to pick up on occasion, and with most groups outside of my area of focus the hope is that eventually they will end up in the hands of somebody who actively studies the group. Such is now the case with my mutillid collection, which will be shipped this week to another collector specializing in the group. In return I will be filling some holes in European representation of my collection of Cerambycidae. 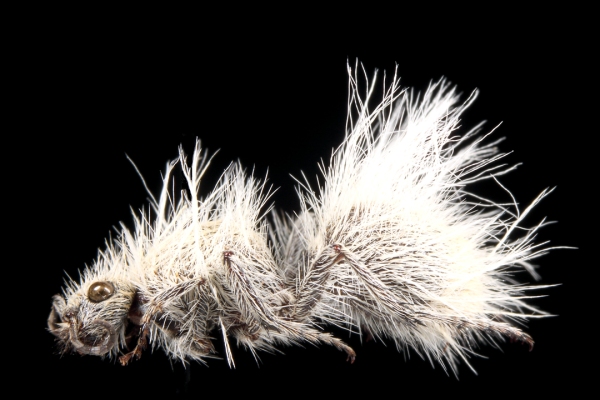 Without question, the most interesting mutillid species that I’ve encountered is Dasymutilla gloriosa. All mutillids are sexually dimorphic, as only the males are winged, but most also tend to be sexually dichromatic to a greater or lesser degree. No species I am aware of takes this to the same level as D. gloriosa! The males (photo below) are rather typically colored compared to other species in the genus, but the females (photo above) are densely covered with long, strikingly white hairs. While this would seem to make them quite conspicuous, the true effect is the exact opposite as they easily confused with fuzzy plant seed. For this reason they are commonly called thistledown velvet ants. I encountered the female in west Texas in 2003 while walking a mountain trail and at first thought it was the fuzzy seed of a creosote bush (Larrea tridentata) being blown by the wind—except there was no wind! It took me a little while looking closely at it before I could figure out what it actually was. This is the only female of this species that I’ve seen in the wild, and I’ll be a little sad to see it sent to another location.

The male also is the only one I’ve encountered—or at least taken the trouble to collect. I would have never suspected this male, which I collected in southern California in 1991, was the same species as the female that I collected many years later. My thanks to Kevin Williams, who provided the identifications for both of these specimens. 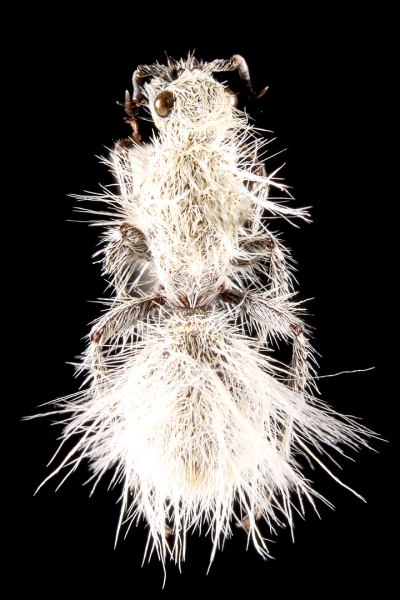