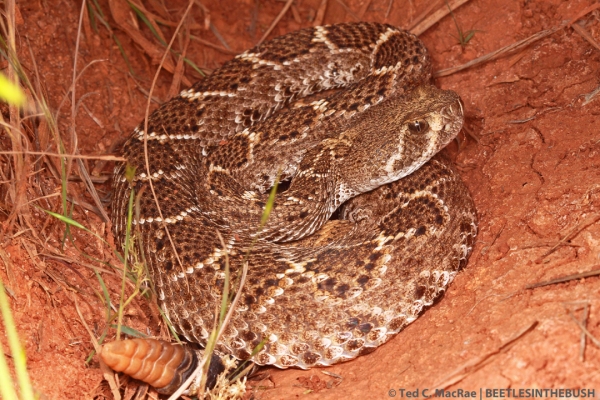 I’m always delighted to see snakes, even venomous species, and whenever my collecting takes me west I know my chances of seeing snakes are good. My first stop during the current collecting trip was the Gloss Mountains of northwestern Oklahoma, and although I have visited this place several times since “discovering” it in June 2009, I have seen only a single snake during all of my previous visits—a charming little Western Pygmy Rattlesnake (Sistrurus miliarius streckeri). I’m a little surprised by this, as the habitat looks perfect for the one snake that truly don’t look forward to encountering—the Prairie Rattlesnake (Crotalus viridis). As I roam the surrounding mixed grass prairies (by both day and night) I am ever on the watch for these terrifyingly aggressive snakes, having learned my lesson with this species a few years ago in South Dakota’s Black Hills. I spent two days in the area during this trip, and I still have not seen one, but I did see a young (just over 2 feet in length) Western Diamondback Rattlesnake (Crotalus atrox)—my first for this species. Although he was lying in an eroded ravine in the red clay talus slopes and partially hidden by an overhanging clump of grass, the diamond pattern immediately drew my eye as something out of the ordinary, and I was able to move the grasses aside (with my net handle!) and get this shot before he even flinched. After the first flash he started getting agitated, and I was only able to get two more (not as good) shots before he’d had enough and began retreating into the thicker grass above the ravine—rattle buzzing vigorously as he left. Comparatively speaking, he was one of the most docile rattlesnakes I’ve encountered, but since this is the only Western Diamondback I’ve seen I don’t know if that is a hallmark of the species or more due to his young age.

Ted C. MacRae is a research entomologist by vocation and beetle taxonomist by avocation. Areas of expertise in the latter include worldwide jewel beetles (Buprestidae) and North American longhorned beetles (Cerambycidae). More recent work has focused on North American tiger beetles (Cicindelidae) and their distribution, ecology, and conservation.
View all posts by Ted C. MacRae →
This entry was posted in Reptilia, Vertebrata and tagged herpetology, nature, Oklahoma, reptiles, snakes. Bookmark the permalink.