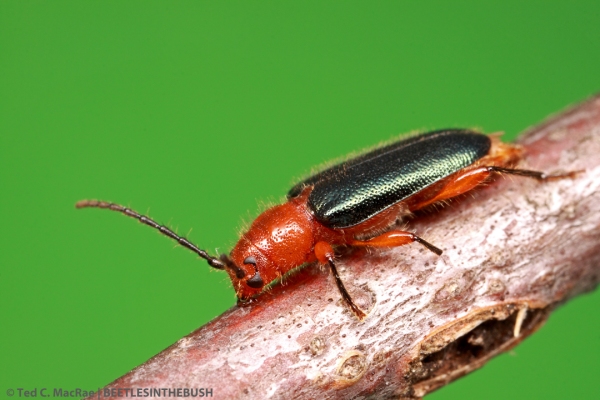 When Enus (Enoclerus ichneumoneus) was beaten from a dead grape vine in southeastern Missouri, he wasn’t alone. Along with him was this longhorned beetle representing Phymatodes amoenus (family Cerambycidae). Even though P. amoenus and E. ichneumoneus are both woodboring beetles, their association together on this dead grape vine was not purely coincidental. Phymatodes amoenus is associated exclusively with the genus Vitis (family Vitaceae), its larvae developing within the dead vines. Enoclerus ichneumoneus also bores through dead wood in the larval stage but is much less discriminating about the plant species. This is because E. ichneumoneus and most other checkered beetles (family Cleridae) don’t actually eat the wood within which they are tunneling, but rather prey upon the other woodboring beetle larvae that they encounter in the wood. The adult checkered beetles are thus attracted to dead wood not as a food source itself, but rather the woodboring larvae that will provide food for their offspring. 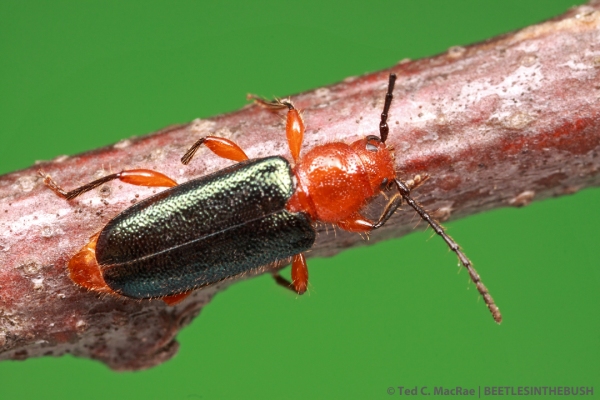 Half an antenna and the left mesotarsus were the price to pay for rooming with Enus!

When I collected these two individuals, I put them together in a vial as I continued beating the vine to look for other individuals. None were found, but I had forgotten that adult checkered beetles also are predaceous. Needless to say, Enus found the cerambycid beetle to be easy pickings while they were confined together and managed to eat half of the cerambycid’s left antenna and left mesotarsus before I realized my oversight and rescued the poor thing.