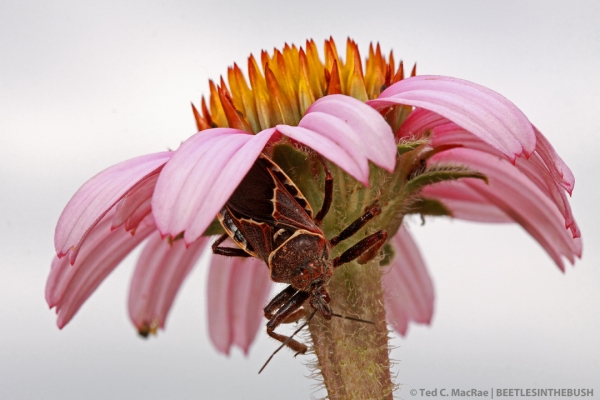 While looking for longhorned beetles on prickly pear cactus (Opuntia phaecantha) at Gloss Mountains State Park, I saw a coneflower that didn’t look quite right—there was nothing on the top, but there seemed to be something on the underside. I knelt down cautiously and peered underneath the blossom to find this bee assassin (family Reduviidae, genus Apiomerus) lurking under the petals. As a collector with eyes always looking for signs of insects, I’ve trained myself to look for both the obvious and the non-obvious, yet  this brightly colored insect still almost completely escaped my notice. I can imagine that a bee with little room in its mind for anything but collecting pollen would be easy pickings for such a stealthy predator. 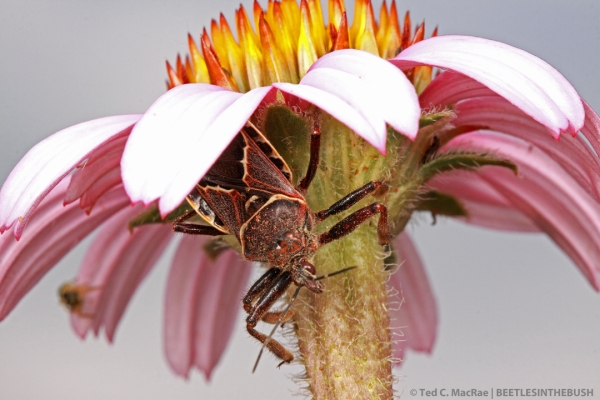 The coloration of this individual seems to best match specimens representing the species Apiomerus spissipes, which ranges broadly and abundantly across the Great Plains (Berniker et al. 2011). The location of Gloss Mountain State Park in western Oklahoma places it almost smack in the middle of the recorded distribution for this species, which is largely replaced further east by the closely related but generally darker A. crassipes. Interestingly, very few Oklahoma specimens were available for examination by Berniker and colleagues during their study, a fact that once again demonstrates the need for continued collecting in even “well-collected” states like Oklahoma.

6 thoughts on “Bee Assassin on Coneflower”