In my recent Great Basin Collecting Trip (GBCT) overview, I provided some general comments about the longhorned beetles in the genus Crossidius that were the focus of the trip and, in many cases, photographs of the habitats in which the beetles were found. I didn’t show many photos of the beetles themselves, however, and such will be the focus of a series of posts intended to provide a little more detail about the individual taxa that we encountered. I was fortunate to obtain photographs of every species and subspecies that we found and, thus, will include these in the posts as well. Many of the images are bona fide, in situ field photographs—i.e., the beetles were photographed in their native habitat on the host plants on which they were encountered (although in most cases the plant part on which the beetle was resting was detached from the plant and hand-held to control the background). Some beetles were too active to photograph at the time they were encountered, in which case they were confined with their host and photographed that evening after they had settled down—either with a natural background or in front of blue-colored fabric intended to simulate a sky background. I believe in full disclosure when it comes to nature photography and will indicate if photos are anything other than in situ field photographs.

No need, however, for such disclosures in this first post of the series, as these images are true field photographs of Crossidius hirtipes immaculatus—the first longhorned beetle that we encountered on the trip. One of 16 currently recognized subspecies of C. hirtipes, populations assignable to this taxon are rather widely distributed from eastern Oregon to east-central California across northern Nevada (Linsley & Chemsak 1961). We found good numbers of these beetles in west-central Nevada at Davis Creek Regional Park (Washoe Co.) on flower heads of what I believe to be Chrysothamnus viscidiflorus. According to Linsley & Chemsak (1961), this subspecies differs from the nominotypical subspecies (the latter occurring further north in Oregon and Washington) by its paler coloration and (as the subspecies epithet indicates) reduced maculations of the elytra. In males the elytra are often completely immaculate (above), while in females the maculae are reduced to a narrow sutural stripe (below). A similar subspecies, C. h. setosus, occurs at the western edge of the distribution of C. h. immaculatus in east-central California (Nevada Co.) but is distinguished by the presence of short, dark, bristle-like hairs interspersed with longer hairs on the antennal scape—these are lacking in C. h. immaculatus. 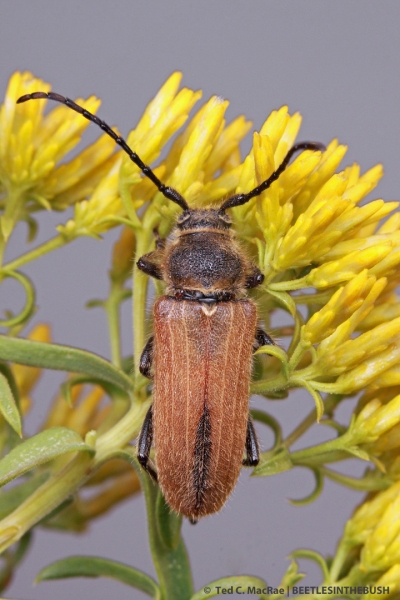 In addition to C. viscidiflorus were healthy stands of Ericameria nauseosa, but as was the case with nearly all subsequent C. hirtipes encounters adults were found almost exclusively on flower heads of the former. This contrasts somewhat with published information that suggests the species breeds as larvae in the roots only of C. viscidiflorus but readily feeds as adults on flowers of E. nauseosa. We saw several dozen individuals at this site, but only a small handful were found on E. nauseosa. We also noted the early exit of the adults, which started disappearing after ~5 pm local time. We suspect they crawl down to the base of the plant to spend the night hiding among debris, although we were unable to find any adults on the lower stems or around the base of the plants despite careful searches.