I’ve been traveling across the southeastern U.S. for the past couple of weeks, during which time I had a chance to go polypipin’ at several of my destinations! For those of you who don’t know what polypipin’ is, it’s when you look for stuff under polypipe. What is polypipe? It’s a big tube of plastic with holes in it that farmers lay across one end of their field and then pump water into. The water leaks out of the holes and runs down the furrows between the rows, irrigating the crops. This is a popular method of irrigation in the Mississippi Delta because the super flat terrain allows the fields to be easily graded for such at much lower cost than the center pivot irrigation systems that are more often used in the rolling terrain of the Midwest and other areas. An unexpected side benefit of polypipe irrigation (at least for naturalist nerds like me) is that insects and all other manner of critters find the ground under polypipe to be a great place to hide. In a stroke of genius, friend and colleague Kent Fothergill used polypipin’ to confirm that Tetracha carolina (Carolina metallic tiger beetle), was not only a resident of the Mississippi Lowlands in southeast Missouri (there was some question as to whether the few existing records from that area represented vagrant individuals), but well established and abundant throughout the region (Fothergill et al. 2011). Ever since then I’ve gone polypipin’ whenever the opportunity presented itself, usually with good results. 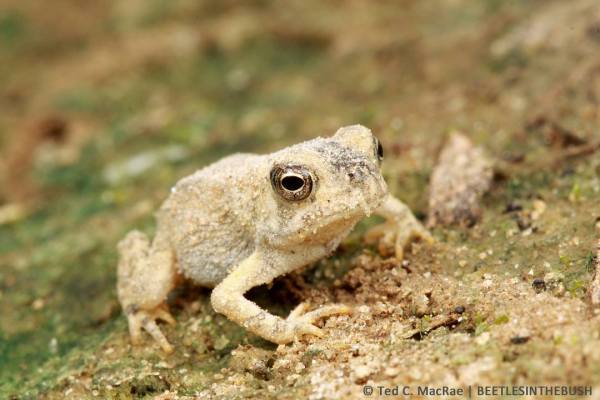 Juvenile toad, but which one? | Starkville, Mississippi

This little toad was photographed in Starkville, Mississippi, where I had visited a soybean field and found polypipe stretched all along the north end of the field. He was clearly annoyed at being suddenly exposed to daylight when I lifted up the polypipe and immediately hopped over to the edge that was still contacting the ground and tried to crawl back in, but I can be persistent and finally ‘persuaded’ him to come back out and pose for this one shot before I felt sorry for him and let him finish his escape. This was one of the tiniest toads I’ve ever seen—no more than 2.5 cm snout to butt, and not being as well-versed in herps as I am in hexapods I didn’t really know what kind of toad he represented. Apparently there are a few different species in Mississippi, but the most common is Fowler’s toad (Bufo fowleri). Its size surely suggests it is a juvenile, which can be notoriously difficult to identify due to their still undeveloped cranial ridges and coloration. Considering the agricultural setting and location in northeastern Mississippi I think this is probably the most likely choice.

9 thoughts on “Teeny, tiny, timid tot of a toad”