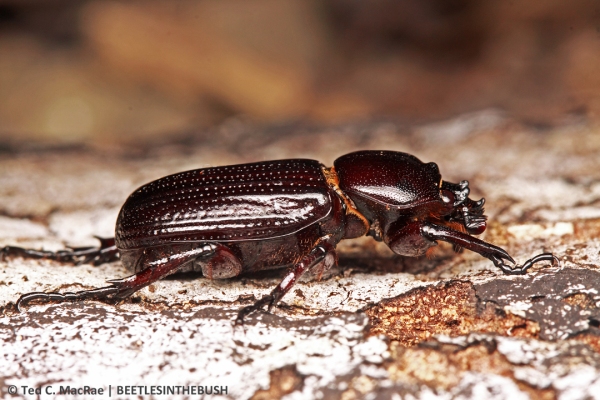 Few beetles enjoy more popularity than the scarabs (family Scarabaeidae)¹, and within that group certainly the members of the subfamily Dynastinae are the most popular of all due to their often enormous size and presence of highly developed horns on the head and pronotum. The largest beetles in the U.S. (at least, by weight)—the Hercules beetles, genus Dynastes—belong to this subfamily, and in the tropical regions of the New World members of the genus Megasoma (literally meaning “giant body”) are among the heaviest-bodied beetles in the world (ironically, the title spot goes to members of the genus Goliathus in the subfamily Cetoniinae). Of course, almost without exception in the insect world exceptions apply, and not all dynastine scarabs are large, heavy-bodied beetles. In fact, members of the genus Cyclocephala are often mistaken for May beetles (subfamily Melolonthinae), while members of the genus represented by the species featured in this post—Phileurus—are sometimes mistaken for smallish “bess beetles” (Odontotaenius disjunctus) in the family Passalidae due to their flattened and parallel-sided body.

This species resembles and is sometimes mistaken for the common “bess bug.”

Phileurus is a primarily Neotropical genus, with only two species ranging north into the United States and one, P. valgus, occurring broadly in the eastern United States. Despite its broad distribution, P. valgus seems to be more common in the southern part of the country and has been recorded under bark of decaying wood and attracted to lights. Saylor (1948) notes that Richter reared a specimen from a larvae collected in a cavity of a dead basswood (Tilia sp.) tree, and adults have also been reared from larvae collected in a blackjack oak (Quercus marilandica) snag (Taber & Fleenor 2005). The individual featured here was one of several that I found under the lower trunk bark of a large, standing, dead pin oak (Q. palustris) tree growing in a wet, bottomland forest in the Mississippi Alluvial Plain of extreme southeastern Missouri. I have seen this species from time to time over the years—never abundantly—but these are the first that I have seen in a situation other than being attracted to lights. The bark was quite loose and covered wood that was soft and well-decayed, and three adults were found embedded within a granular frass-filled gallery directly beneath the bark. One can presume that larvae could also have been found within the wood had I done a little digging. 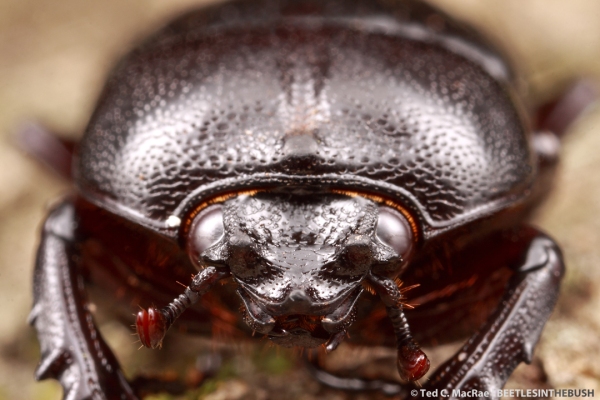 The head of this species is adorned with three small cephalic and one pronotal tubercles.

Taber & Fleenor (2005) also note that adults of this species possess structures known to be used by other beetles for sound production, but they did not say whether they have heard this beetle making sounds. I have never heard sounds from these beetles when handling them, either. This contrasts with true bess beetles, which stridulate to make a “kissing” sound when handled.

Saylor, L. W. 1948. Synoptic revision of the United States scarab beetles of the subfamily Dynastinae, No. 4: Tribes Oryctini (part), Dynastini, and Phileurini. Journal of the Washington Academy of Sciences 38(5):176–183.