In April 2012 I spent some time in northern Argentina collecting insects, and while collecting was not that great (late in the season after a protracted drought) I saw enough of interest to make it a worthwhile effort. Among the insects that I saw were two species of weevil (family Curculionidae)—one being Eurhinus c.f. adonis (Giving me the weevil eye!) and the other this one, also kindly identified by Charles O’Brien as Erodiscus obidensis (Monte 1944). Both of them were found on flowers of Solidago chilensis growing along the roadside near La Escondida in Chaco Province; however, the two weevils are almost complete opposites in terms of coloration and body form—E. adonis brilliant metallic green and robust chunky, and E. obidensis chestnut-colored and elongate slender.

An obvious feature of E. obidensis are its two stout spines located at the apices of the elytra. I presume that these serve a defensive purpose to protect them against potential avian or reptilian predators. However, if elytral spines are all that is needed for such then why are these structures not found widely across the order Coleoptera—certainly the potential is there, as many beetles exhibit very small spines at the elytral apices. With enough selection pressure one can easily imagine that larger spines would be selected for. Either the spines also/instead serve some other purpose, or development of spines is more energetically expensive than I am imagining. 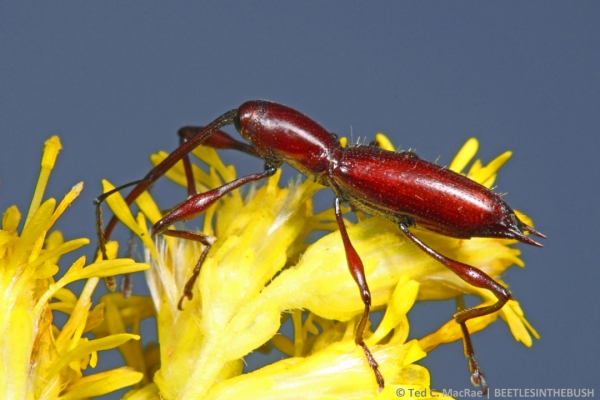 What purpose those daggers?

Compared to most of the insects that I have featured on this blog, I wasn’t able to find much information on this species. It was originally described as Atenistes attenuatus var. obidensis from Óbidos in the Brazilian state of Pará (Monte 1944) and is listed as such in the Blackwelder (1947) catalogue. However, my weevil literature is sparse compared to the other beetle groups with which I am more familiar, and I found nothing else in searches on the web as well. It apparently is already known from Argentina, as it is listed at the website Curculionidae de Argentina (but without any photos). As far as I could tell, these are the first photos of the species to be posted to the web, at least with the associated name. Since so little seems to be known about this weevil, I take it upon myself to give it a common name, and I can’t think of a more amusing and fun-to-say name than the “dagger butt weevil” in reference to its distinctive apical spines.

4 Responses to The “Dagger Butt Weevil”