Last June while collecting beetles from cottonwood trees at Beaver Dunes State Park, Oklahoma, I came across one of my favorite beetles—Alaus oculatus, or eyed elater (family Elateridae, or click beetles). Large by click beetle standards, the most striking feature of eyed elaters is, of course, their false eye spots, which are not eyes at all but patches of pubescence—black surrounded by a narrow ring of white—intended to look like eyes and located prominently on the prothorax rather than the head. A handful of related species are also found in various parts of the U.S., all of which exhibit variations on this same eye spot theme. Undoubtedly these spots serve to frighten would-be predators, much like the false eye spots on the thorax of many lepidopteran caterpillars. The true eyes, of course, are much smaller and are located on the head in front of the “false eyes.” In contrast to the prominently visible eye spots, pubescence on the rest of the body seems to function in cryptic coloration. The mottled patterning blends in with the bark of trees where these beetles usually hang out for effective concealment.

If either of those first two lines of defense don’t work, the beetles exhibit “thanatosis” by lying still with legs and antennae appressed to the body to fool the would-be predator into thinking that they are already dead. 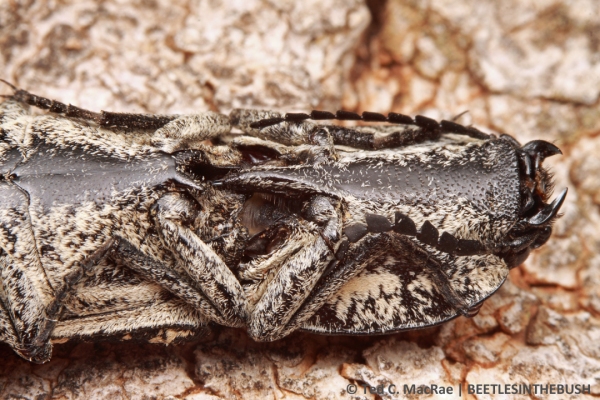 Their most remarkable defensive behavior, however, is their ability to snap or “click” their bodies with enough force to free themselves from the grasp of a novice predator (or careless entomologist). The click is produced by a large prosternal spine and mesosternal notch on the beetle’s underside. To click, the beetle arches back its head and pronotum to retract the spine from the notch cavity, the tip of which is then pressed against the edge of the notch. Muscles within the thorax contract, storing elastic energy, and as the flexible hinge between the pro- and mesothoraces moves, the spine slides until its tip passes over the edge of the notch, releasing the elastic energy stored in the thoracic musculature and snapping the spine back into the notch cavity with enough force to produce an audible click.

A large spine on the prosternum fits into a groove on the mesosternum.

This clicking ability also comes in handy if the beetle frees itself from the grasp of a predator and lands on its back. While the beetle’s legs are too short to right itself, its click is capable of launching the beetle high into the air. By tumbling while in the air, the beetle has a 50% chance of landing on its feet (thus, several attempts may be required). When jumping from a hard surface, the beetle is actually capable of launching itself to a height that is several times its body length and can tumble several times while in the air. This raises an interesting question, since theoretically an elevation of only one body length and half of a body revolution are all that is needed for an upside-down beetle to right itself. The power of the click, thus, grossly exceeds the minimal requirement for righting, yet the beetles seem incapable of moderating the force of the click. Furthermore, the 50% probability of landing suggests that they are also incapable of controlling the orientation of their body during the jump and landing. Did the clicking mechanism initially evolve to combat the grasp of predators and was then co-opted for use in jumping, or was the ability to jump the selective pressure that drove its evolution? 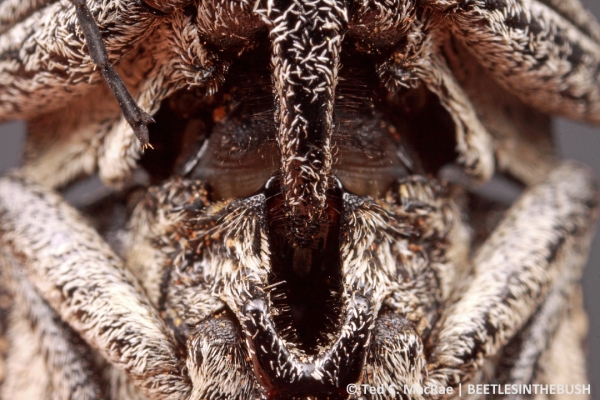 Locked and loaded—the mechanism is primed for the click.

Ribak & Weihs (2011) used biomechanical analyses with Lanelater judaicus to support the idea that the click evolved primarily as a mechanism for vertical jumping. They reason that the excessive vertical distance of the jumps ensures sufficient height when jumping from soft substrates such as foliage or loose soil. A followup study evaluating the effect of natural substrates (Ribak et al. 2012) found that jump height was dramatically reduced (by ~75%) when the beetles jumped from leaves that covered approximately half of the study site and that the reduction in jump height was directly correlated with the amount of work absorbed by the substrate. This provides further evidence that the beetles do not moderate their jumping force and instead simply aim to jump “as high as possible” and rely on random chance for landing back on their feet. 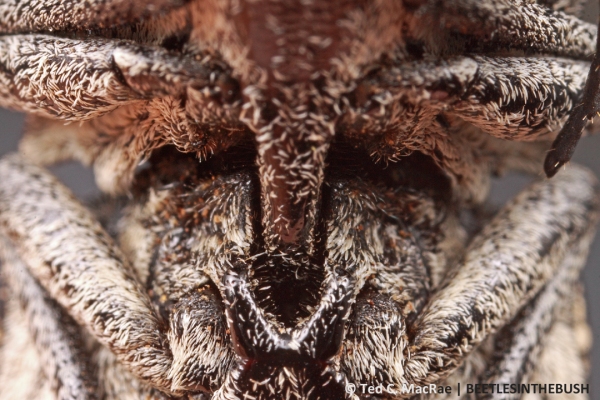 After clicking, the spine returns to its resting position within the groove.

18 Responses to Pop! goes the beetle