Last weekend I traveled to Georgia with two field companions to look for insects associated with sand scrub habitats in the southeastern part of the state. Of course, while I am an entomologist with beetles as a focus, I am also a naturalist who keeps an eye out for all manner of critters, plants, and other natural features. Thus, when we saw an enormous tortoise about to cross the road while driving through sand scrub habitat south of Riedsville, there was no debating whether we should stop and take a look. We immediately recognized him as a gopher tortoise (Gopherus polyphemus), even though none of us had actually ever seen a gopher tortoise in person. (I say “him” because the of the fairly long gular projection, which is generally longer in males than in females.)

Contrary to popular perception, this tortoise walked rather urgently.

We pulled over about 50 yards further up the road and began hiking back towards the tortoise. As we got closer, he immediately turned and started running (yes, running!) towards us. Seriously. He reminded me of a puppy that had gotten lost and just seen his master! I don’t think I have ever seen something quite like that, and I don’t think I can really explain it, either.

He definitely had somewhere in mind that he wanted to go…

Once we got quite close, he turned away and crawled back up onto the road in an attempt to cross to the other side. I had grabbed my big camera, as I did not want to record this encounter with just my iPhone. I also did not want to photograph him on the road surface, so one of my companions picked him up (with gloves on) and brought him back over to the roadside where I began taking photographs on a more natural substrate. 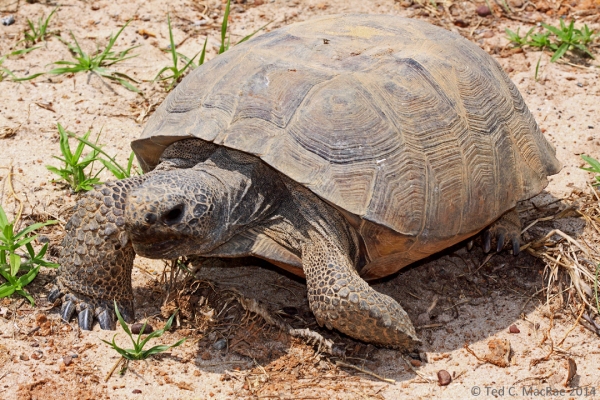 …and he wanted to get there quickly.

This was one enormous tortoise—the carapace easily measured 12 inches in length, which I later read is at the upper end of the range for adults of this species. We marveled at his old-man head and thick, powerfully clawed front legs—an obvious adaptation for a digging lifestyle. I almost wish I had borrowed my companion’s gloves and taken advantage of the opportunity to pick him up myself and see how much he weighed. No matter—he was easily the largest testudine that I have ever seen! 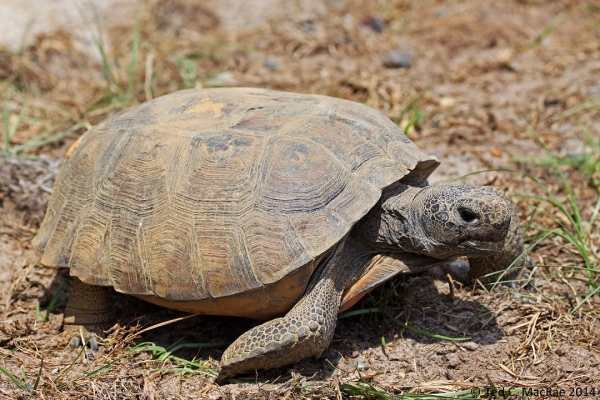 Who would think a tortoise could be so hard to photograph!

I don’t know where this tortoise was going or why, but I do know that it was, surprisingly, one of the most difficult to photograph subjects I have ever encountered. He was quite capable of moving along at a rather quick pace (tortoise-and-hare fables notwithstanding) and never stopped urgently trying to cross the road. It was difficult to stay low to avoid a “top-down” perspective and still keep in front of him. We moved him to the other side of the road, thinking that might make him happy, but he would then just turn around and try to get back on the road and cross back to where he came from. I decided to just set the camera on autofocus and, with abundance natural light, starting snapping away to play a numbers game. Out of the few dozen or so exposures I got, the ones shown here are all that I kept (the others mostly showing a “bum” leg or two). The first photo at top is my favorite of the bunch.