On a recent collecting trip to southeastern Georgia, we spent the night in Swainsboro. We found a hotel and went to the restaurant across the street for dinner. It was dark by the time we got back to the hotel, and since it was a rather warm, muggy night we did what any entomologist worth his salt would do on such a night—creep around the parking lot and building perimeter checking the lights for insects. Late May is still a tad early for checking lights, but among the small assortment of insects we did find were these slim, active insects known as mole crickets (family Gryllotalpidae). Not true crickets, though related, and certainly not moles, these odd-looking critters are immediately distinguishable by their mole-like, fossorial (digging) front legs—a remarkable example of convergence between members of two completely separate animal phyla. 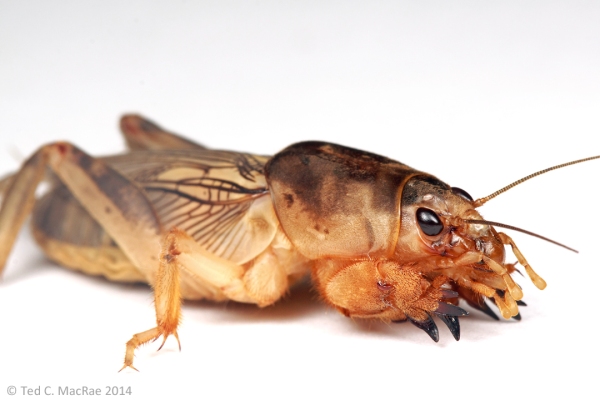 Rather than fiddle with them out in the parking lot, I decided to bring them inside for studio photographs on a clean, white background. The widely separated tibial dactyls (literally, “shin fingers”) of the digging feet identify them as Scapteriscus borellii, or southern mole cricket. Despite their name they are an exotic insect, having originally come from much further south (southern South America) and arriving in the U.S. early in the 20th century. While true crickets jump, mole crickets run—and fast! They also, however, have the comical tendency to play dead for a moment when disturbed before bolting to safety. I was able to use this behavior to my advantage while taking photographs—every time he began running, all I had to do was cover him up with a bottle cap. After only a few seconds I was able to remove the cap and take a shot or two before he got the nerve to try to bolt again.

7 Responses to Who likes mole crickets?