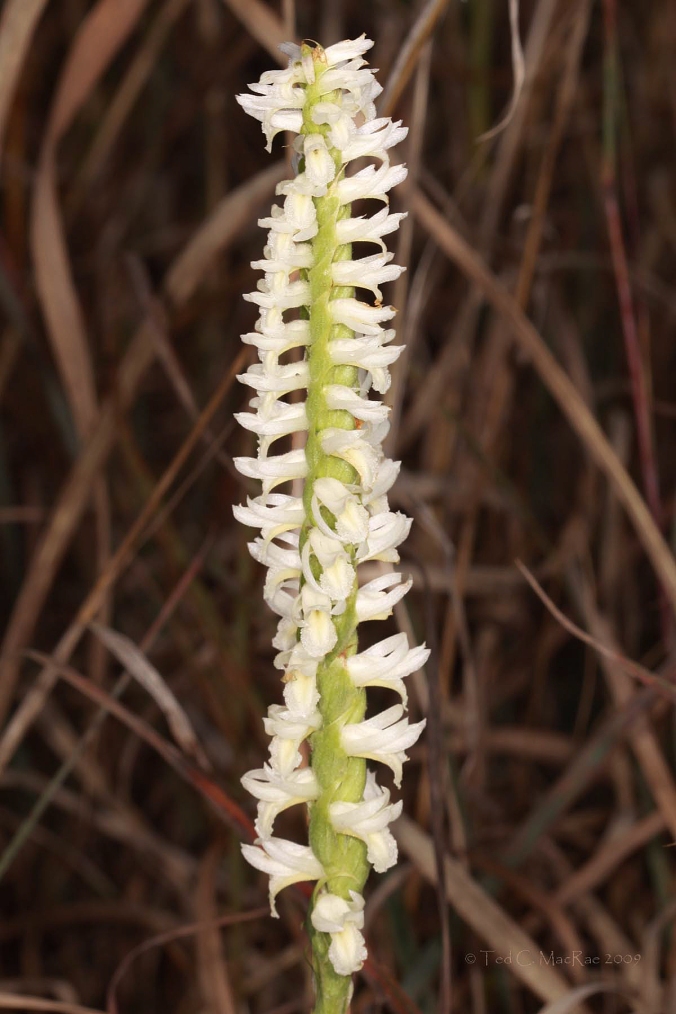 First things first—everyone who participated in the quiz in the previous post correctly identified the orchid flower in the photo as belonging to the genus Spiranthes, and a few were on the right track with their species suggestion of S. cernua.  However, Scott Namestnik from Indiana and Doug Taron from Illinois, were the only ones who recognized it to be a close relative of that species, the recently-described S. magnicamporum.  Nice job!  The plants in these photographs were found during early October in the dry dolomite glades of White River Balds Natural Area in southwestern Missouri (part of Ruth and Paul Henning Conservation Area).  The creamy white inflorescences stood in stark contrast to the russet big bluestem (Andropogon gerardii) and rusty gold Indian grass (Sorghastrum nutans) stems that dominated the rocky landscape. 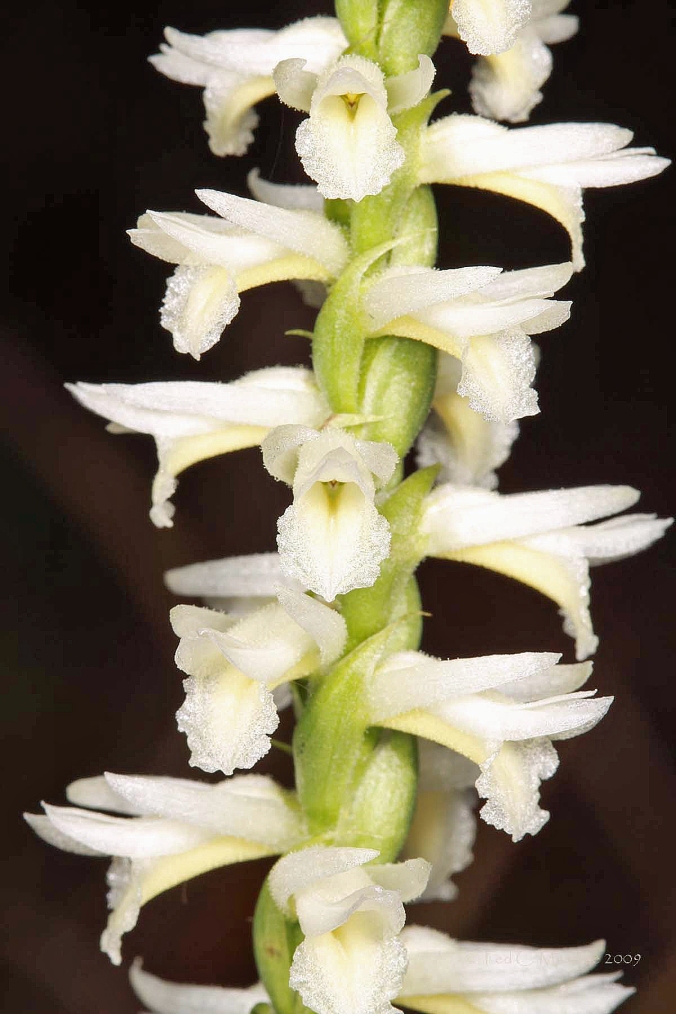 Spiranthes¹ is one of the more complex genera of North American orchids, seven of which are known to occur in Missouri (Summers 1985).  Spiranthes magnicamporum² is closely related to S. cernua and was only recently (1975) described as a distinct species.  Conclusive separation of the two species requires microscopic examination of the seeds (those of S. magnicamporum are monoembryonic, whereas a large percentage of the seeds of S. cernua are polyembryonic) (Luer 1975).  In the field, however, S. magnicamporum can generally be distinguished from S. cernua by its spreading rather than appressed lateral sepals and absence of basal leaves at the time of flowering³.  It is likely that many previous records of S. cernua in Missouri actually refer to this species, as both occur throughout much of southern Missouri and sporadically in northern Missouri (refer to the USDA Plants Database Missouri county level distributions for S. cernua and S. magnicamporum).  However, they are ecologically isolated in that S. cernua prefers wet lowlands with acidic soils, while S. magnicamporum is typically found in drier uplands with calcareous soils.  Both species are late-season bloomers, but S. magnicamporum blooms even later (mid-September into November) than S. cernua (mid-August to mid-October) and has more fragrant flowers.

¹ From the Greek speira—σπειρα,—”coil,” and anthos—ανθος,—”flower,” referring to the coiled or spiraled spike of flowers common in the genus.

² From the Latin magnus, “large,” and campus, “plain,” meaning “of the Great Plains” in reference to the primary geographic area where this species is found.

³ My identification of these plants as Spiranthes magnicamporum was confirmed by Dr. George Yatskievych, author of Steyermark’s Flora of Missouri. 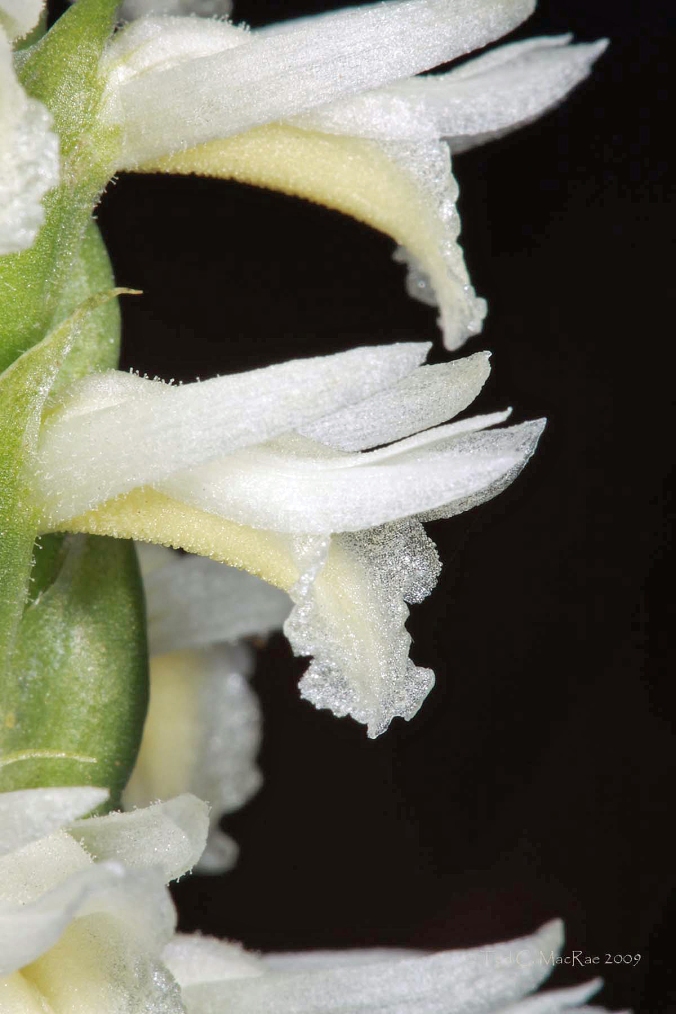 Orchids as a whole exhibit highly specialized pollination biology, and species of Spiranthes are no exception, with the spiral arrangement of their flowers evidently an adaptation to pollination by long-tongued bees (e.g. bumblebees, Bombus spp., and megachilid bees) (van der Cingel 2001).  Flowers are protandrous, i.e., they are functionally male when they first open and become functionally female as they age, and open sequentially from the base, resulting in female flowers on the lower inflorescence and male flowers on the upper inflorescence.  Thus, bee pollinators tend to act as pollen donors when visiting lower flowers and pollen recipients when visiting upper flowers.  Pollinia from male flowers are attached to the bee’s proboscis as it tries to access nectar secreted into the base of the floral tube.  When visiting a plant, bees start at the bottom of the inflorescence and spiral up to the top before flying to the next plant.  The reasons for this behavior, called acropetal movement, are not fully understood but could be related to the tendency for nectar rewards to be greater in the lower flowers.  Whatever the explanation, the result is to promote outcrossing between neigboring plants.

While specific insect pollinators have been documented for a number of Spiranthes spp., apparently the only account of pollination in S. magnicamporum is documented by Jeffrey R. Hapeman, author of the website Orchids of Wisconsin:

I have seen a bumblebee (Bombus nevadensis ssp. americorum) pollinating Spiranthes magnicamporum in a prairie in southeastern Wisconsin. After visiting a number of inflorescences, the bee began to vigorously scratch at the pollinia on its proboscis, trying to remove them. The bee became so involved in trying to remove the pollinia that it fell to the ground, where it was easily captured. The specimen was determined by Steve Krauth, and is deposited in the Insect Research Collection at the University of Wisconsin-Madison. Apart from this observation, there are no published accounts of pollination of S. magnicamporum. 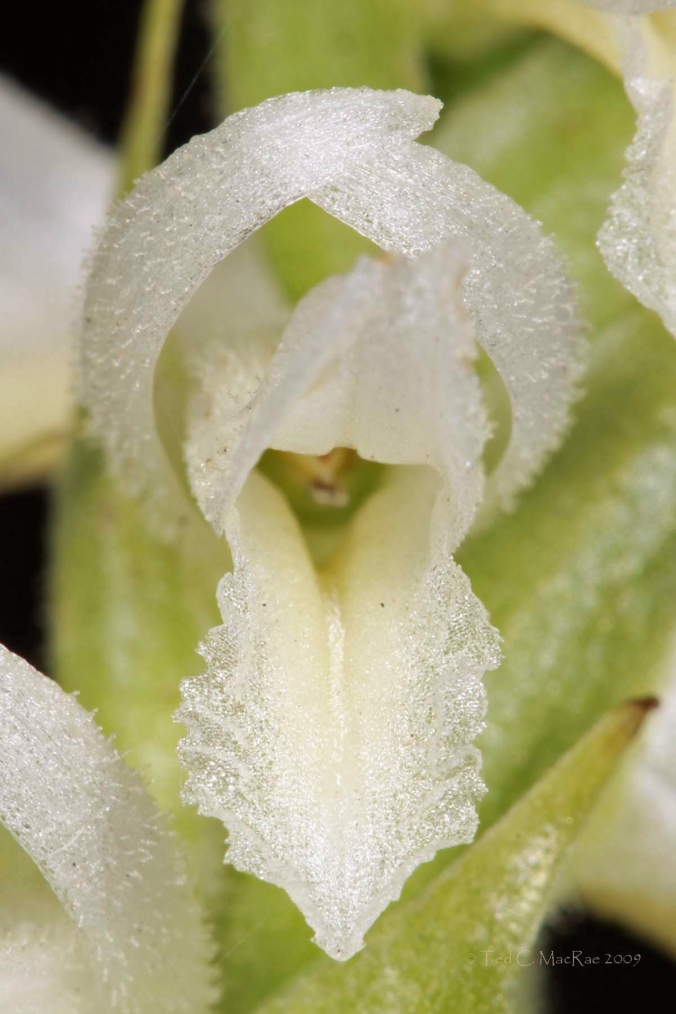