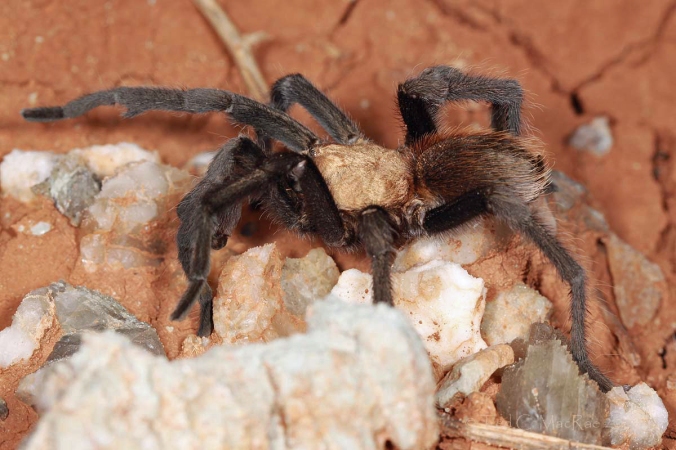 One of my destinations on my annual fall tiger beetle collecting trip last October was The Glass Mountains in northwestern Oklahoma. Rising from the red Permian beds of the central Great Plains, the Glass Mountains are a series of mesas and buttes capped by thick layers of the sparkling, glass-like crystal selenite. It is still common to see them referred to as the “Gloss” Mountains, the result of a transcription error by a mapmaker back in the late 1800s, and although the soils that comprise the formations are very old (laid down as sedimentary deposits during the Permian Era some 250 million years ago), the landscape itself is relatively young – a result of erosion by glacial outwash from the Rocky Mountains during the past 1 million years.

Of course, I was not here to study crystals or geology, but to look for tiger beetles! It was at this spot that earlier in the year (June) I had discovered a new population of Cylindera celeripes (Swift Tiger Beetle), a rarely-collected flightless species that has declined worrisomely during the past century, and another seldom-collected flightless species, Dromochorus pruinina (Frosted Dromo Tiger Beetle), was also a good find. Neither of these species were my reason for being here in October, however, since by then adults of both have long disappeared. Instead, I was hoping that the large, unidentified larvae that I had seen in their burrows at this site back in June would be out as adults. Their great size suggested two possibilities – Cicindela obsoleta (Large Grassland Tiger Beetle) or C. pulchra (Beautiful Tiger Beetle), either of which would be a great find. Alas, overcast skies and a cold, biting wind made whatever tiger beetles were there – lovers of sun and warmth that they are – remain secreted within their protected haunts. I still have a shot at finding out what they are – I successfully extracted two larvae from their burrows and fed them well in the laboratory with fat fall armyworm larvae before putting them to sleep for the winter in a 10°C (50°F) incubator.  If all goes well, I’ll wake them up this spring and finish them out to adulthood this year.

There were a few consolation prizes on the day, one of which was this large, lumbering male tarantula seen slowly making its way down the red clay slopes. For all their charisma and noteriety, it’s interesting to note that the taxonomy of U.S. tarantulas (almost all of which belong to the genus Aphonopelma) is rather poorly known – some 50 species have been described, but many of the descriptions are inadequately based on limited material (or even single specimens) and often rely upon variable, highly artificial characters (Prentice 1997). Brown or black species with no distinctive coloration (such as this one) seem to present the greatest challenge; however, the internet seems to have concluded that the only tarantula present in Oklahoma is Aphonopelma hentzi. 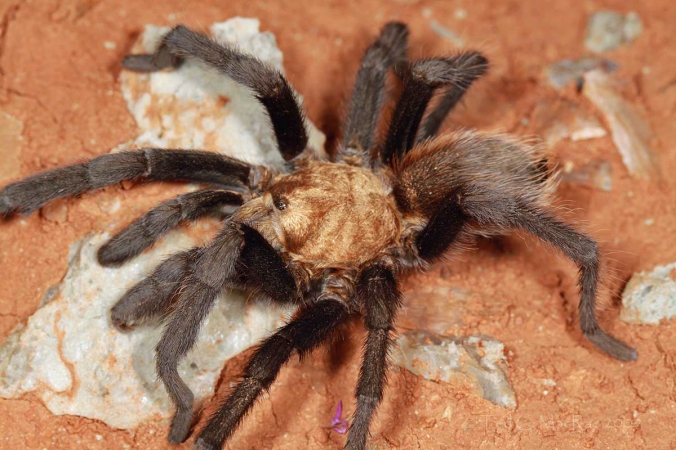 This spider can be distinguished as a mature male by way of the tibial hooks that can be seen on the undersides of the front pair of walking legs in the first photo.  Female and immature tarantulas normally stay in their burrows during the day and come out at night to hunt, but wanderlust strikes the adult males during late summer and fall, during which time they’ve been documented traveling as far as 1.3 km over a period of 2-3 weeks (Janowski-Bell and Horner 1999) – presumably in search of females with which to mate.  It is only after the male’s final molt that wanderlust sets in and the tibial hooks appear, which are said to function in holding the female (and her fangs!) at a safe distance during copulation.

It may seem hard to believe, given its large size and slow movement, but I found this spider exceedinly difficult to photograph compared to the tiger beetles that I have spent much more time with. I’m not used to photographing subjects with a 4-5 inch leg spread, which made it difficult for me to judge working distance and get a handle on proper settings and positions for the flash units. Once I did get that under control, I found the tarantula’s incessant desire to keep moving maddeningly frustrating. Tiger beetles, as active and flighty as they are, nevertheless eventually sit still long enough to allow at least a shot or two before bolting, but this tarantula… just… never… stopped… moving! I can’t tell you how many shots I discarded because it’s legs were splayed awkwardly in multiple directions. Eventually, however, I got enough shots that I felt there should be at least a few good ones among them, and those are the ones I share here.

Most male tarantulas will die within a few weeks or months of their final molt. Still, that doesn’t deter me from scooping them up whenever I find them and bringing them home to enjoy as pets for whatever time they have left. My daughters probably like tarantulas best of any of the critters that I bring home – I never have to ask “Has anybody fed ‘Hairy’?” (and props to awesome wife for enduring something most ‘normal’ wives couldn’t even begin to contemplate).

Prentice, T. R. 1997. Theraphosidae of the Mojave Desert west and north of the Colorado River (Araneae, Mygalomorphae, Theraphosidae). The Journal of Arachnology 25:137–176.