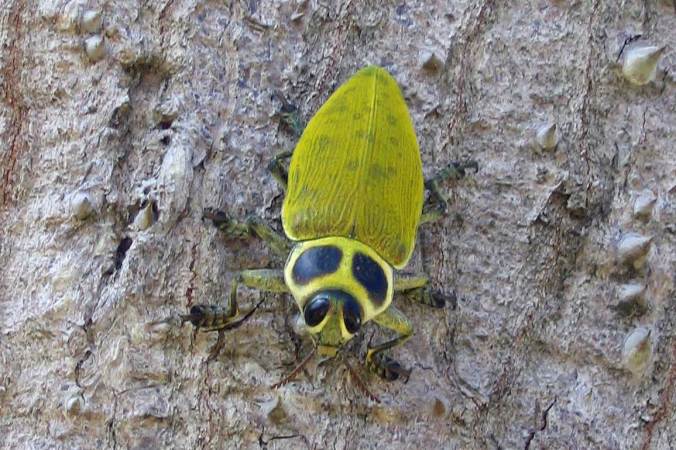 In recent weeks I’ve featured a few jewel beetles that I have encountered amongst specimens sent to me for identification (see “Aaack!-maeodera” and “Acmaeodera carlota in northern Arizona“).  While the new distributions and even unknown species that they represent are fascinating from a scientific perspective, their diminutive size (~6 mm in length) probably makes them less than spectacular to the non-specialist.  The family Buprestidae does, however, contain some very large species, including a few that qualify as bona fide giants.  One such species, Euchroma gigantea (Giant Metallic Ceiba Borer Beetle), occurs from Mexico through Central America, the West Indies, and most of South America.  At a maximum of 65mm in length, it is not only North America’s largest jewel beetle, but also the largest jewel beetle in the entire Western Hemisphere.

My colleague Steve Meyer encountered and photographed this individual in Negril, Jamaica.  Although its scientific name translates to “colorful giant”, the beetle in the photo is especially so due to the delicate, waxy bloom covering its elytra. This bloom is secreted by the adult after transforming from the pupa and prior to emerging from its larval host, giving it a bright yellow-green appearance.  After the beetle emerges and becomes active, the bloom is quickly rubbed off and the beetle takes on the shiny, iridescent purple-green color by which it is more familiar.  The presence of bloom on this individual suggests that it had just emerged from the trunk of the kapok tree (Ceiba pentandra) on which it was sitting.  Kapok and other large trees in the family Bombacaceae serve as hosts for larval development for this species (Hespenheide 1983).

Indigenous peoples in Central and South America have long utilized the dazzlingly colored elytra of these beetles to create beautiful natural jewelry and adorn their clothes and textiles.  The species is also eaten in both the larval and adult stages – Tzeltal-Mayans in southern Mexico (Chiapas) roast the adults when available, and the Tukanoans (northwestern Amazon) also eat the larvae (Dufour 1987). I have eaten a few insects in my day, but none as thick and massively juicy as the grub of this species must be. Holometabolous larvae typically contain a rather high percentage of fat (up to 66% dry weight) to meet the demands of pupal development and adult reproduction, and I suspect this makes the larvae quite tasty (especially when roasted). If there is any insect in the world that I really, really, really want to eat – it is the larva of this one!