I try to keep my blogroll useful and relevant – by that I mean that each blog I list has, in a sense, “earned its spot” by offering engaging writing and/or quality photographs on subjects that interest me, and if they go silent or become, well… boring then I remove them. In the past two years, I’ve pretty well explored most of the established blogs dealing with insects and natural history and know what I like, so additions these days tend to be primarily startup blogs. Recommending startups is risky – blogs come and go all the time, and it’s difficult to know if the energy and passion apparent in the first few posts of a blog indicates sustainable creativity or just an ephemeral burst. With that caveat, I’d like to highlight three new blogs that have not only captured my interest, but also seem to have what it takes to sustain that interest for a long time to come.

Chris Grinter is an entomologist at the California Academy of Sciences in San Francisco. He has an interest in microlepidopterans, and his 6-week old blog, called The Skeptical Moth, has featured some rather stunning photographs of these tiny, yet extraordinarly beautiful insects. Moreover, he actually knows something about them – how refreshing it is to see scientific names attached to each photograph and associated discussion that doesn’t sound like a Wikipedia excerpt. As his blog title suggests, he also has a passion for encouraging science education and critical thinking, adding to the general feeling of erudition. There are lots of bug blogs out there, but only a few really good ones – this has the makings of a really good bug blog! 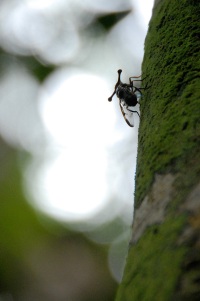 Peter Yeeles has only been blogging since the middle of March, but he is well-known among entomology-blog-circles by his frequent and articulate participation in the comments sections.  Happily, Peter has finally taken the bait and started his own blog, called ptygmatics.  His contributions thus far have been more than engaging and have featured some wonderful photographs of Australian insects (the stalk-eyed flies being far and away my favorite).  Peter has described himself as a “work in progress” entomologist, but I think we are about to witness the emergence of a more substantial entomologist than he is willing to admit. If nothing else, you must see his stalk eyed flies video link.

Heath Blackmon is the newest blogger featured here, and his blog, Coleopterists Corner, in fact has only three posts so far.  Nevertheless, I was impressed by his willingness to jump right into Coleoptera deep phylogeny in his inaugural post, in which he reviewed a recent paper on the subject by Friedrich et al. (2009).  Yea, another beetle lover!  An amateur naturalist for many years, Heath has decided he wants to become a professional coleopterist and is beginning graduate studies this fall (sounds like another back-to-schooler that has won our hearts in recent months).  His first post was followed by a post on how to make a $69 malaise trap.  So he’s also a collector – that’s even better.  The clincher, however, was the photograph he posted in his sidebar of him collecting tiger beetles in Florida – well, this one just has to be a winner!

Ted C. MacRae is a research entomologist by vocation and beetle taxonomist by avocation. Areas of expertise in the latter include worldwide jewel beetles (Buprestidae) and North American longhorned beetles (Cerambycidae). More recent work has focused on North American tiger beetles (Cicindelidae) and their distribution, ecology, and conservation.
View all posts by Ted C. MacRae →
This entry was posted in [No taxon] and tagged beetles, blogging, moths. Bookmark the permalink.