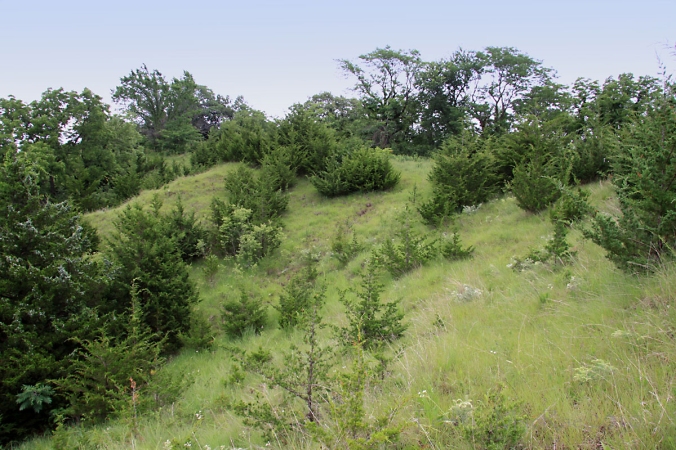 As my interest in prairie insects has increased over the past few years, so has my interest in their conservation. Many insects are restricted to prairies through dependence upon prairie plants or their unique physical and trophic characteristics. Thus, preservation of not only prairie plants but their insect associates as well is a major goal of conservationists.  The task is daunting – for example only ~1% of tallgrass prairie remains in the central U.S., the rest long ago converted to agriculture or otherwise irreparably altered.  Prairies are dynamic natural communities that rely upon disturbance – this need to “disturb to preserve” creates an oxymoronic conundrum for restoration ecologists that is made even more difficult by the fragmented nature of today’s prairie landscape.  The situation here in Missouri is even more difficult, as nearly all of our grassland preserves (tallgrass prairie, sand prairie, loess hilltop prairie and glades) are exceedingly small and highly disjunct relicts not connected as parts of larger systems.

In recent years, prescribed burning has become the management tactic of choice for restoring and maintaining grassland preserves.  There are good reasons for this – not only are increased floral diversity and reversal of woody encroachment well-documented responses to fire, but burning is also highly cost-effective (a critical consideration in today’s climate of shrinking public budgets).  As the use of prescribed burning on grassland preserves has become widely adopted, however, concerns about the impacts of fire on invertebrate populations have been raised.  The subject is now an area of intense research, but studies are hampered by the limited availability of large, long-unburned tracts of native prairie, and no scientific consensus has yet emerged.  Regrettably, the debate has polarized into “pro-” and “anti-fire” camps that seem unable to communicate with each other constructively.  This is unfortunate, since both ends of the spectrum offer ideas that could be used to achieve the goal of preserving prairie remnants while mitigating concerns about invertebrate impacts.  I have previously expressed my own views on the subject, a position that I suspect some might mistakenly characterize as “anti-fire.”  While I do support the use of prescribed burning, I do not support its use with no consideration of other prairie management strategies such as haying and light grazing (not to be confused with the heavy, abusive, unmanaged kind of grazing that has degraded so much of our landscape).  All of these tools (as well as parcels that receive no management at all) have potential value in prairie management and should be considered.

Those interested in potential fire impacts on prairie invertebrates will be interested in this latest salvo by Scott Swengel and colleagues, who used metadata analysis to correlate declines of prairie butterflies in the Midwest with the widespread adoption of prescribed burning as a management tactic.  The authors present convincing evidence that tallgrass prairie butterfly populations are not co-evolved with fire regimes currently used for prairie management, although their conclusions will no doubt be challenged.  Nevertheless, until a firmer scientific consensus can be achieved, prudence should dictate some measure of caution in the use of fire as an exclusive prairie management tactic.

We are pleased to announce a new article by Scott Swengel, Dennis Schlicht, Frank Olsen, and Ann Swengel, based on long-term data that has just been published online,  Declines of prairie butterflies in the midwestern USA.  This paper is available free from Springer Open Choice at http://www.springerlink.com/content/l732444592662434/fulltext.pdf or by going to the Journal of  Insect Conservation Online First section and scanning through the articles in ascending number order until getting to articles posted 13 August 2010.

The trends of tallgrass prairie skippers shown here, although disastrous, underestimate the decline in Iowa and Minnesota for several reasons:

Some good news is that conservation based on existing knowledge of specialists’ management responses gets far better results (as shown by Regal Fritillaries and Karner Blues in Wisconsin than typical management.  So declines like this are not inevitable.

The Ecological Interpretations and Conservation Conclusion section of Discussion contain some of our new insights explaining the observed about land-use effects on prairies and butterflies.

My thanks to Scott Swengel for giving me permission to reprint his introduction.

14 thoughts on “Flaming the debate”