I tend to be a minimalist when it comes to mounting beetles. That is, I mount them so that they take up minimal space – legs tucked neatly and symmetrically against each side of the body and antennae laid straight alongside each elytron. This is important not only for space considerations (always a premium, but especially so in a private collection), but also to minimize the chances of accidental breakage when handling specimens. I must admit that beetles mounted in such manner don’t have quite the visual appeal of beetles mounted in a more relaxed, life-like position, but the ability to pack them tightly in my limited drawer space generally overrides whatever aesthetic desires I may have. Every now and then, however, I come across a specimen that just begs to be mounted life-like due to its striking appearance or impressive structures. Pseudoxycheila tarsalis (Central American montane tiger beetle), which I recently received as a gift from Henry Hespenheide, is one such species.

Remounting a dry, already-mounted beetle is a little trickier than mounting a fresh specimen. The beetle must first be relaxed, and even when relaxed well the beetle is never as pliable as when fresh. This makes it more difficult to get the legs and antennae into the desired position, and there is always a higher risk of breakage while trying to do so. Many different methods for relaxing beetles are available – some better than others, but for a one-off specimen I usually just soak it in very warm tap water. Generally 15-20 minutes will suffice, although large specimens may require more than this. Soaking has the added benefit of softening whatever debris might be caked onto the beetle so that it can be removed more easily. In this case, once the beetle was relaxed I used forceps to hold the specimen by the pin to keep it submerged in the water while “scrubbing” its upper surface with a camel-hair brush. Younger eyes might be able to do this unaided, but I find a binocular dissecting scope at low power to be quite helpful. 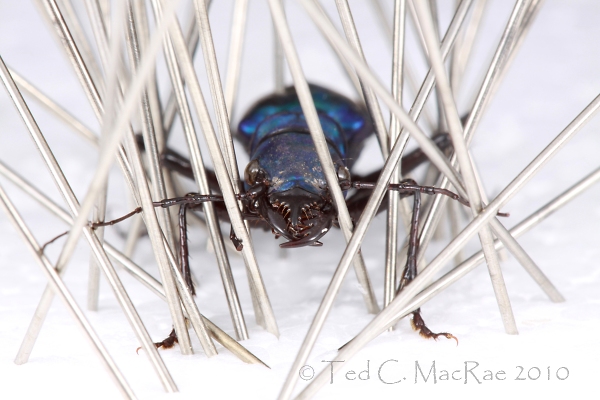 ﻿Once clean, I inserted the pin into a styrofoam block for positioning of the body parts. Since this specimen was to be posed in a life-like position, I didn’t insert the pin all the way, but rather left the body up off the styrofoam as it would be in life. Also, my favorite tiger beetle pose is slightly elevated on the front legs, so I inserted the pin at an angle to leave more space under the head than the abdomen. Then it was a matter of using brace pins to hold each body part in the desired position. I work from “sturdy” to “delicate” – i.e., the sturdiest body parts are placed in position first and the most delicate are done last, since positioning the sturdier parts causes tugging and pulling that could break the more delicate parts if they are already braced in position. This usually means bracing the body itself first, then then the legs, and lastly the antennae. Again, my eyes prefer to do this under a scope. While the antennae and tarsi can usually be positioned directly with the brace pins, sturdier body parts may need to be positioned and held in place with fine-tipped forceps in one hand while placing brace pins around them with the other hand. I also work “proximal to distal” with each part – i.e., positioning the part closest to the body first, followed by the more distal portions. ﻿﻿There’s no way around it – this kind of work takes practice and patience, and even with all my years of experience I still managed to break off the distal four antennomeres from the left antenna (and failed in my attempt to glue them back on after drying). For this specimen, a total of 42 brace pins were used.

While fresh specimens may take several days (to a week or more for large specimens) to dry, relaxed specimens usually dry much more quickly – overnight was more than adequate for this specimen. Be careful when removing the brace pins! If you grab them too tightly as you pull them out of the styrofoam, you can end up “flicking” a leg or antenna and breaking it – better to grab the pin head loosely and lightly spin it back and forth as you pull up gently until the pin is free. Once all the brace pins are removed, pull up carefully on the main pin as well until you’re sure the tarsal claws aren’t grabbing the styrofoam – if they are, slide a pin or forceps underneath and gently unhook the claws before pulling the pin out any further. Replace the labels and voila – a much more aesthetically pleasing specimen! Is all this effort worth it? You be the judge. Below on the left is the photograph I showed previously for the specimen prior to cleaning and remounting, while on the right is the now clean and nicely mounted specimen. 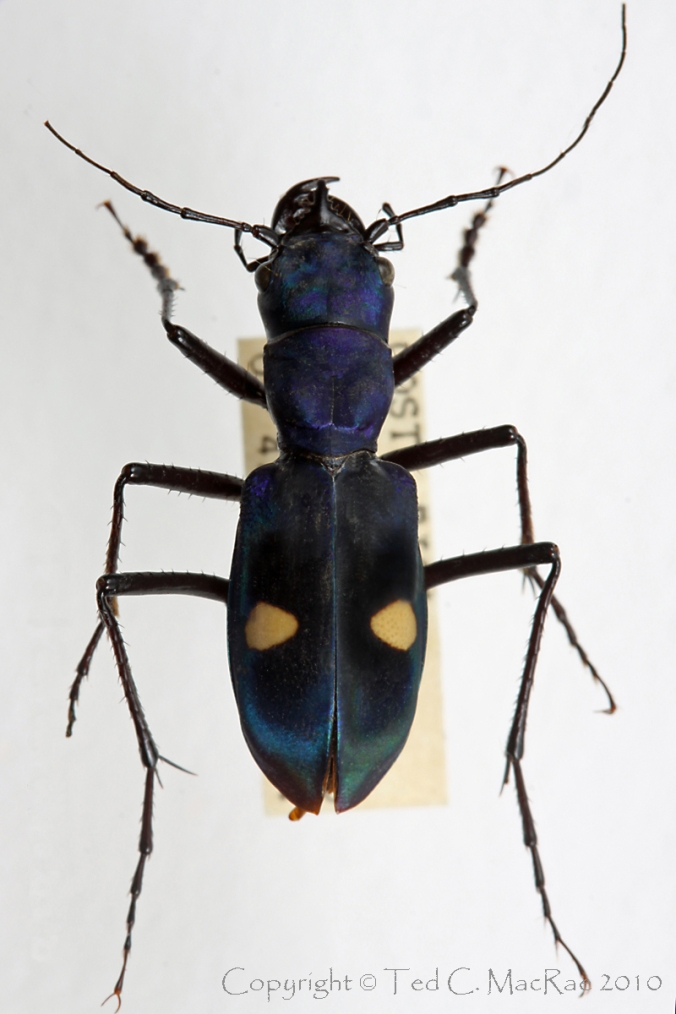 With the beetle in its new life-like position (and scrambling for any chance to get some more practice with my new diffuser setup [photos coming soon, I promise!] as I slide into the depths of this Midwestern winter), I couldn’t resist the urge to take a few studio shots of the remounted beetle “on white.” While photographs of posed, dead beetles may not be to everyone’s liking, they do provide a chance to see detailed views of species that may not be otherwise available. The first photo above and the three below are some of my favorites from the session: