Most of the Green River Formation (GRF) insect fossils that I have on loan clearly represent either beetles (order Coleoptera) or flies (order Diptera). I’ve already shown a few of the latter (fungus gnat, midge), as well as some that don’t belong to either order (ant, cricket?). Here are a few more that seem identifiable to order, but family-level identification is less certain. Thoughts from the readership would be most welcome. 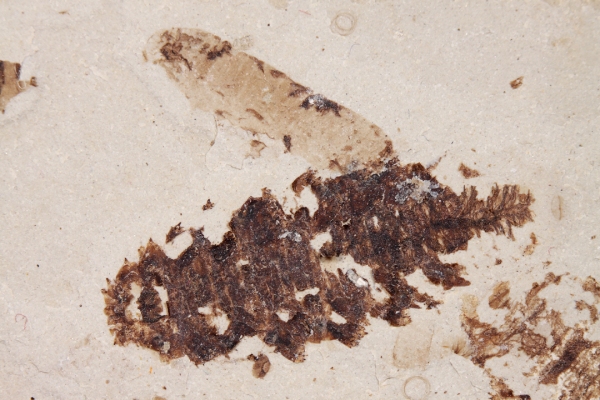 This fossil shows an aggregation of insects that I believe represent some kind of beetle. Based on shape and size (16.7 mm length) I’m guessing perhaps either a diving beetle (family Dytiscidae) or whirligig beetle (family Gyrinidae). These are both aquatic families, although only the former is among the beetle families recorded from the GRF by Wilson (1978).

There are two insect fossils on this specimen, but the closeup is the one near the center of the rock. It is tiny (3.5 mm in length), and at first I thought it might be a fly (order Diptera). However, dipterist Chris Borkent thinks it might be a small hymenopteran (bee?) because it has what looks to be long multi-segmented antennae. The only bee family recorded for the GRF by Wilson (1978) is Anthophoridae (now included within Apidae), of which this fossil clearly is not a representative. There are six other hymenopteran families recorded in that work, of which Tenthredinidae is the only one that seems plausible. Of course, it could represent a family not recorded by Wilson (1978). Collected along Hwy 139 in Douglas Pass (Garfield Co., Colorado).

Here is a closeup of the other fossil (far right in photo above). This looks to me like a brachyceran fly, and I’ve sent a high resolution version of the image to Chris Borkent to see what he thinks.

The label accompanying this fossil indicates “Mosquito (?),” but to my eye this looks like a true bug (order Hemiptera). It is small—only 5.9 mm in length—and has the gestalt of a plant but (family Miridae) or seed bug (family Lygaeidae). GRF fossils representing the latter but not the former were recorded by Wilson (1978). Also collected along Hwy 139 in Douglas Pass (Garfield Co., Colorado).