Lepidopteran caterpillars are without question the most important pests affecting soybean in South America, while stink bugs run a close second in terms of economic impact and as the targets of insecticide applications. There are, however, a number of weevil species (order Coleoptera, family Curculionidae) whose incidence has increased during the past decade or so as the area planted to soybean continues its decade’s long expansion on the continent. The most important of these is Sternechus subsignatus, a  relatively large (and rather attractive black-and-yellow) species that was first detected in southern Brazil in the 1970s. It has since spread to northern Brazil and in recent years has also begun affecting soybean in Salta and Tucumán Provinces of northern Argentina (sometimes considered a distinct species, S. pinguis). Known locally as “picudo grande” (big weevil), adults clip the petiole of leaves and girdle the stems, leading to stand loss. One adult is capable of killing multiple plants, so that even light infestations can result in severe damage.

I’ve not yet seen “big weevils” for myself, but there are at least two other species that are showing up in soybean fields, particularly in Salta and Tucumán Provinces. During my recent visit to Argentina I happened upon a soybean field in northern Tucumán infested with one of them, Promecops carinicollis, a few photos of which I show here. This species is much smaller than S. subsignatus and is, thus, called “picudo chico” (little weevil)—certainly an appropriate name for the 3- to 4-mm long adults. While the integument is black, the body is densely covered with flat scales that form irregular white blotches on the elytra and otherwise give the beetle a mottled-brown appearance.

Damage consists of adult feeding around the leaflet margins, giving them a scalloped appearance.

Like S. subsignatus, it is the adults that cause damage to the plants, although instead of the stems and petioles their feeding seems to be confined to the margins of the leaflets. This gives the leaflets a “scalloped edge” appearance that is quite distinctive and unlike the leaf damage caused by other leaf-feeding insects of soybean. The feeding causes a general reduction of the leaf surface area of the plant, which reduces the plant’s capacity to photosynthesize. However, as soybean has a rather high capacity to compensate for foliage loss by growing new foliage, especially during the earlier vegetative stages of growth, it would take rather high pressure by these weevils to cause enough damage to result in yield loss. It may be one of those soybean pests for which insecticide applications are made much more often than is warranted. The most important impact of this insect probably occurs just after seedling emergence, during which time feeding on the cotyledons and first leaves can weaken seedlings enough to cause stand loss. 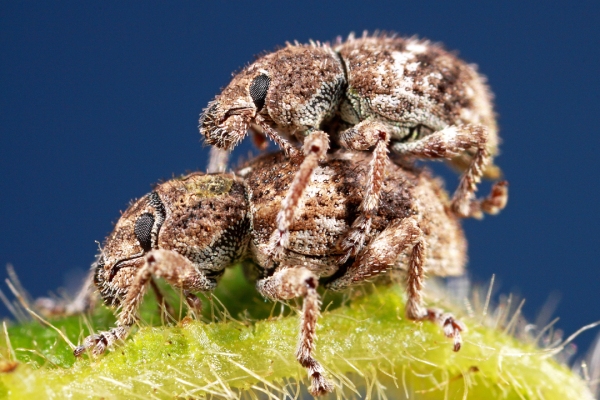 6 thoughts on “The “little soybean weevil””