On Thursday of this past week, it was my distinct pleasure and honor to see my colleague and very good friend, Dr. Charles L. “Chuck” Bellamy named an Honorary Member of The Coleopterists Society. Honorary Membership is the highest level of distinction given by the Society in recognition of devotion to the Society and dedication to the discipline of coleopterology. Chuck was nominated for this honor by colleagues Andrew Cline and Robert Anderson, and the nomination was approved by President Michael Caterino and the rest of the Society Executive Board by unanimous vote. Chuck is only the 12th Honorary Member of the Society and joins such illustrious names as Ross Arnett, Jr., Patricia Vaurie, Henry and Anne Howden, Charles Triplehorn, Brett Ratcliffe, etc.

Selection criteria for Honorary Membership include sustained, active membership in and service to the Society, advancement of coleopterology nationally and/or internationally, and sustained history of publication in The Coleopterists Bulletin and/or other Society publications. Chuck’s qualifications in these regards are beyond reproach:

Chuck’s contributions, of course, go well beyond this short list. He has had editorial roles with other entomology journals, including Zootaxa, The Pan-Pacific Entomologist (my favorite journal!), and Folia Heyrovskyana, served as a research associate with the National Museum of Natural History, the Florida State Collection of Arthropods, the Natural History Museum of Los Angeles County and the Department of Entomology at the University of California – Davis and ventured onto five continents in search of Buprestoidea—not only collecting the specimens, but describing the new taxa he found as well. Overall, Chuck has described more than 200 new species and over 50 new genera.  Andy Cline and Bob Anderson put it best: “Chuck’s contributions have led to a better understanding of one of the most diverse and speciose groups of beetles in the world.” More importantly, however, Chuck has been universally regarded as an excellent friend and colleague!

Chuck was presented his Honorary Membership at the California Department of Food & Agriculture’s Plant Pest Diagnostics Center in Sacramento prior to a seminar by Dr. Art Evans, entomologist. About 40 colleagues from California and beyond were on hand to see Chuck receive his award. For many people, the award presentation by Andy Cline would have been a tough act to follow, but Art Evans (author of multiple entomology books and field guides) had no problem entertaining the crowd with photos and reminiscences of his journey in the creation of another field guide, the highly anticipated Beetles of Eastern North America. For me it was a special week of meeting new colleagues, reconnecting with old friends, and seeing the most important mentor in my life as a coleopterist receive the highest award our society can bestow. Congratulations, Chuck!

For those of you who were not able to attend the event, I include here a link to a PDF version of Andy’s presentation (many thanks, Andy!):

Special appreciation also to Martin Hauser, who graciously contributed these photos he took of the event:

Colleagues, friends and family gather for the presentation.

Chuck is announced as the 12th Honorary Member of The Coleopterists Society.

Chuck learns of his award with wife Rose and sister Gail at his side. 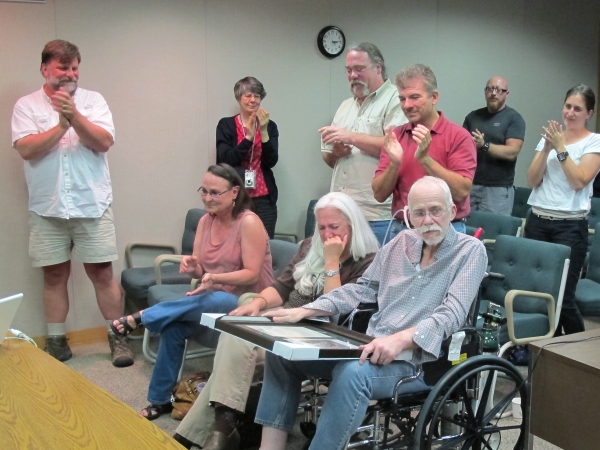 Chuck receives a standing ovation from the audience.

Art chats after the seminar with Lynn Kimsey and Rolf Aalbu.

Larry Bezark and Ted MacRae – we must be talking cerambycids!