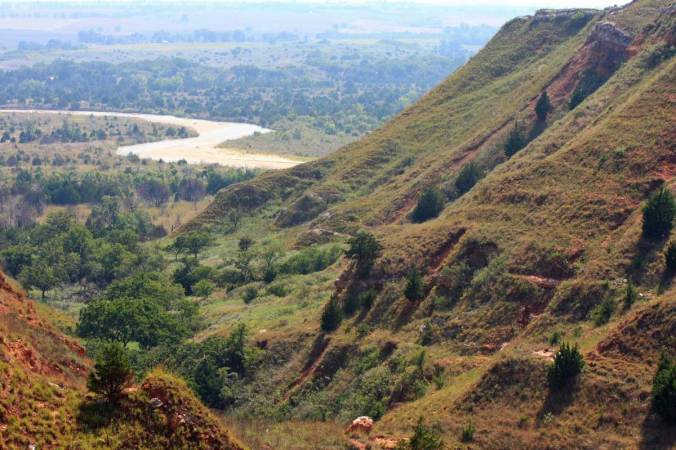 By the time you read this, I’ll be on the road again for yet another extended bug collecting trip.  I don’t think I am ever happier than when I am on one of these trips – whether it be a once-in-a-lifetime visit to Africa or a one-week jaunt to the nearby plains.  With so many places to see – each with their own unique story – I don’t understand how anyone ever ends up getting bored.  The main destination for this trip is the Nature Conservancy’s recently established Four Canyon Preserve in northwestern Oklahoma.  This nearly 4,000-acre preserve contains a stunning assemblage of rugged, mixedgrass prairie ridges dissected by deep, chinquapin oak-lined canyons that drain into the Canadian River in southern Ellis County.  Although past grazing and fire suppression have reduced shrub cover, lowered vegetation complexity and promoted expansion of eastern redcedar (Juniperus virginiana) throughout the area, the preserve nevertheless supports a number of species of conservation concern such as Cassin’s sparrow, Swainson’s hawk, least tern, and Arkansas River shiner. 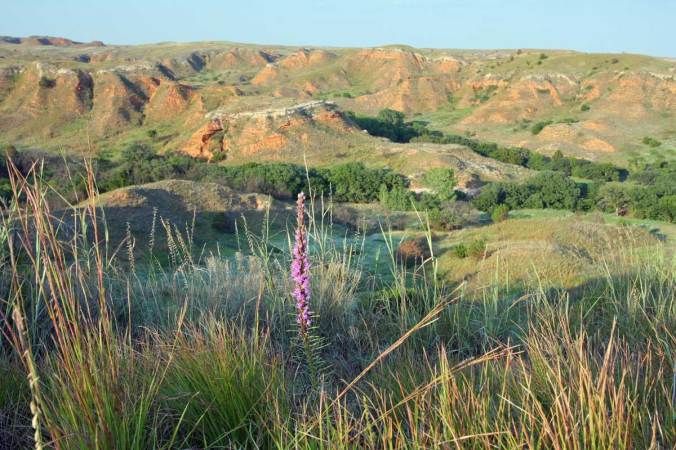 As is typical with many protected areas, studies of the biotic diversity of this preserve have dealt primarily with its flora (Hoagland and Buthod 2007) and avifauna (Patten et al. 2006). Arthropods and other microfauna, on the other hand, remain essentially unknown.  I’ll be joining a group of entomologists – primarily hymenopterists – who began conducting surveys of the preserve’s insect fauna last fall.  While my colleagues gaze at the hyperdiversity of asteraceous flowers looking for things with stings, I’ll be staring at the red Permian sandstone and shale exposures – watching for any darting movement between clumps of grama and little bluestem that might indicate the presence of the enigmatic Cicindela celeripes (swift tiger beetle).  I’ve written previously about the occurrence of this rare, flightless tiger beetle in the Loess Hills of Iowa and our ongoing search for this species in northwestern Missouri in my post The Hunt for Cicindela celeripes.  Although this beetle has not yet been recorded at the preserve, it was seen very recently in nearby Alabaster Caverns – some 60 miles to the north, and a historical record is known from just south of the preserve.  My optimism is bolstered by the fact that the Alabaster Caverns individual was observed in late May – much earlier than the typical late June and early July records for this species further north in its stronghold in the Flint Hills of Kansas.  Of course, I will be looking for other things as well – other species of tiger beetles are likely to occur on the reddish loamy upland soils and quaternary alluvial deposits along the Canadian River, and any number of woodboring beetle species are likely to be found on herbaceous flowers and dead branches of the 51 species of woody plants recorded in the preserve.

After getting our fill of Four Canyon Preserve, we’ll visit the world’s largest remaining tract of tallgrass prairie, Tallgrass Prairie Preserve in northeastern Oklahoma.  Encompassing nearly 40,000 acres, we can do nothing more than only scratch its surface.  However, the tallgrass prairie habitat should provide a nice contrast to the mixedgrass prairie of Four Canyon Preserve, and it will be interesting to compare and contrast these two distinctive plant communities and their associated insect faunas.  After a week on the road¹, I’ll return to St. Louis for a brief respite before beginning a hectic four-week survey in northwestern Missouri for – you guessed it – Cicindela celeripes!

¹ I’ll be without internet access, so please forgive my nonresponsiveness to comments. I do have a couple of posts scheduled to appear during my absence.

My thanks to Mike Arduser, an expert hymenopterist and also a good friend, for bringing Four Canyon Preserve to my attention.  His spectacular photographs that I share here were all I needed to convince me to join him on his return trip this season.