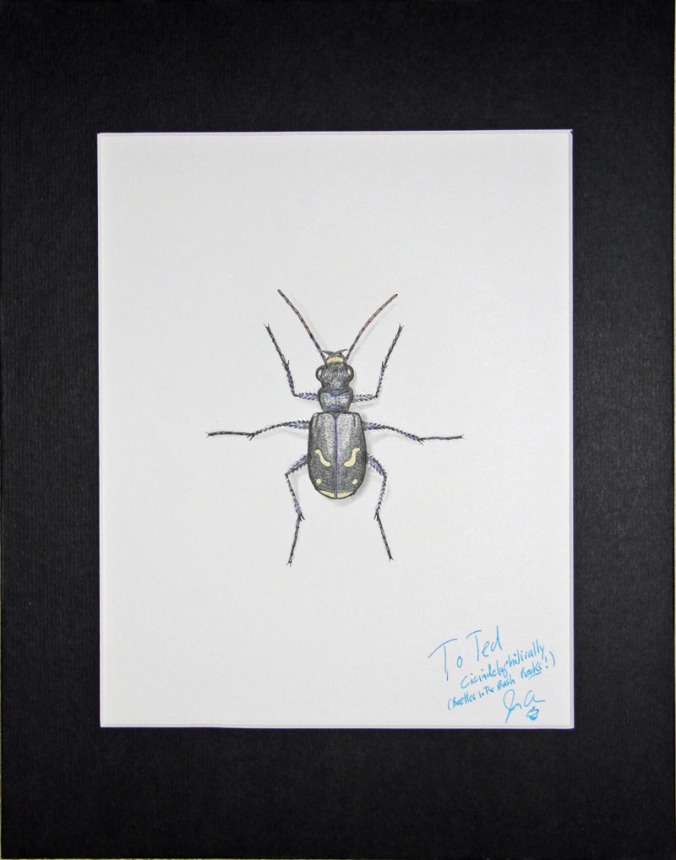 My good friends Kent Fothergill and Kelly Tindall passed through St. Louis last week on their way back home from a visit to Columbia.  I was happy for the chance to get together with them – if only for a short visit, as I hadn’t seen them since the summer before last when Kent joined forces with Chris Brown and I to conduct a survey for Cylindera cursitans (ant-like tiger beetle) in southeast Missouri.  (You may recall that I orginally met Kent when he emailed me out of-the-blue after moving to southeast Missouri in 2007 to let me know he liked tiger beetles.  I responded by suggesting that he look for this long sought-after species, which he found the very next day!)  Kent had told me in arranging the visit that they had something they wanted to give me, and since I had some specimens of theirs to return it seemed a convenient way to make the exchange.  I had no idea what it was they wanted to give me, but I knew they’d been to the recent Entomological Society of America meetings in Indianapolis and figured they must have purchased a cool beetle specimen or something for me.

After arriving at my office, they told me that they’d had the chance to meet John Acorn, a rare celebrity in the world of natural history study.  Most people known John as the host and creative force behind Acorn the Nature Nut, an award-winning television series in which John’s inspiring personality and infectious love of nature introduce viewers to various aspects of Alberta’s natural history.  John is also, however, an accomplished entomologist, with one of his special interests being… you guessed it – tiger beetles!  In 2001, John published The Tiger Beetles of Alberta: Killers on the Clay, Stalkers on the Sand, one of the most accessible and highly entertaining treatments of the family (er… supertribe) to date (if I can ever get my act together and write The Tiger Beetles of Missouri, I want to model it after this book).  John was at the ESA meetings selling original artwork of the different tiger beetle species occurring in Alberta, and Kent and Kelly mentioned to him that they had a friend back in Missouri who would love one of his prints – selecting “Cicindela purpurea auduboni black morph”.  Somehow, my name and association with this blog came up, to which John replied, “Oh, I know about Beetles in the Bush” and then signed the print for me as shown below.  Wow! 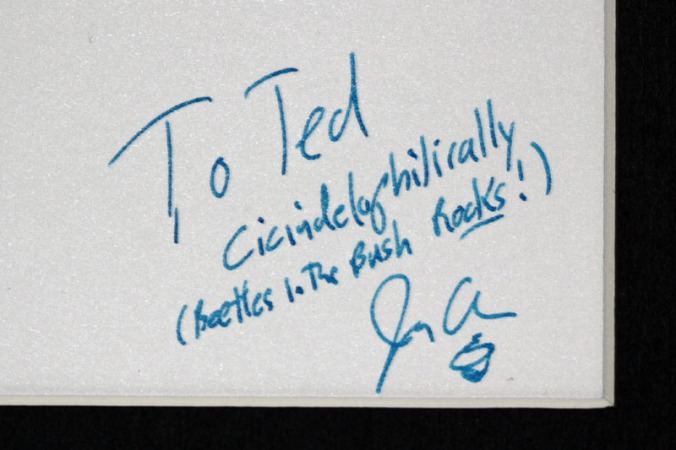 I hope Kent and Kelly understand my stunned silence upon first seeing the print they had so generously given to me and the inscription it bore.  I felt a little silly afterwards returning their kind gesture by just giving them back specimens that were already theirs.  I’m honored by their friendship and will be reminded of it now everytime I look at the print on my office wall.