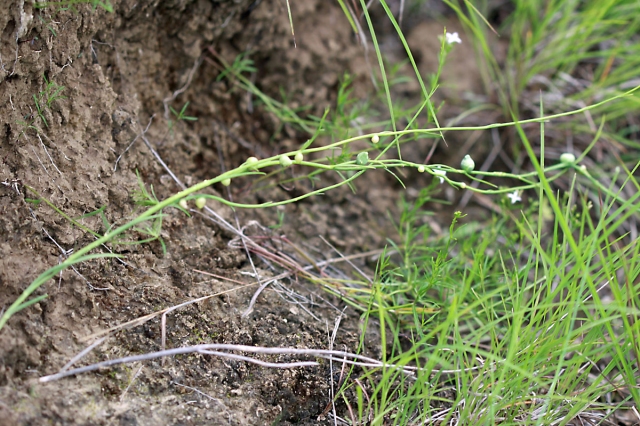 The Loess Hills landform along the western edge of Iowa and extreme northwestern Missouri is home to a unique assemblage of plants and animals.  The majority of these are associated with loess hilltop prairies – grassland remnants that have their origins in the hypsithermal maximum of several thousand years ago and that persist as small relicts on the landform’s steep, dry, south- and west-facing slopes.  Many of the plants and animals found in these grassland remnants are more typically found further west in the Great Plains, but hang on in the Loess Hills as hypsithermal relicts.

One such hypsithermal relict is rush skeletonplant, Lygodesmia juncea, a wirey, leafless-looking plant in the family Asteraceae¹.  More common in the Great Plains, this plant occurs in Missouri only on these loess hilltop prairie remnants.  The first time one encounters this plant, they are left with the impression that the plant bears small, pea-like fruiting structures along the length of its stem.  These are not fruiting structures, however, but galls made by the cynipid wasp Antistrophus lygodesmiaepisum.  Although this insect does not have a common name, it is associated exclusively with L. juncea, as suggested by its specific epithet (which also alludes to the pea-like galls with the suffix -pisum), so I see no reason why this wasp cannot be called the “rush skeletonplant pea gall wasp.”  Some sources variably misspell the genus as Anistrophus (without the first “t”) or the species name as simply pisum, a synonym first introduced by Ashmead in the late 19th century a few years after the species was described (I made both mistakes [and also erroneously referred to L. juncea as skeletonweed] in one of my earliest posts: The Loess Hills in Missouri).  It would seem that Antistrophus lygodesmiaepisum is the correct name, according to Pickering (2009).

¹ Not to be confused with rush skeletonweed, Chondrilla juncea – also in the Asteraceae, which despite the similarity of common names, specific epithet, and general appearance (except with yellow flowers) is an altogether different plant that was introduced from the Mediterranean Region and is now considered an invasive weed in much of the Great Plains. 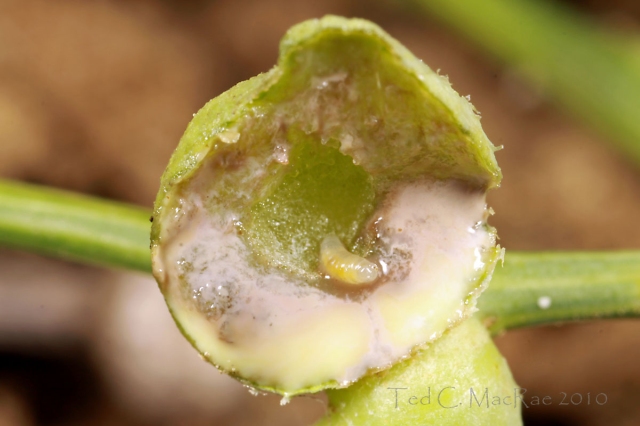 Antistrophus lygodesmiaepisum larva in gall on stem of Lygodesmia juncea.

Rush skeletonplant exudes a latex-like sap when damaged, making it unpalatable to most grazers – this latex-like sap can be seen when the galls made by the wasps are cut open.  Cynipid wasps are the second most diverse group of gall-making insects behind the gall midges, and many species are mono- or oligophagous (Ronquist and Liljeblad 2001), meaning that they are associated exclusively with a single plant species or group of closely related species.  Antistrophus lygodesmiaepisum is one such monophagous species, thus its occurrence in Missouri, like that of L. juncea, is restricted to the tiny loess hilltop prairie remnants in extreme northwestern Missouri.  In recent years, these prairie relicts have suffered heavily from conversion to agriculture, abusive grazing, and suppression of fire that has led to invasion by woody and exotic plants.  In Missouri, only about 50 acres of loess hilltop prairie remain, and only half of these are in conservation ownership, making it among the most critically imperiled of natural communities in Missouri.  While lacking the conservation charisma of L. juncea and the dozen or so other plants and vertebrates that are restricted in Missouri to these prairie remnants, A. lygodesmiaepisum nevertheless deserves equal consideration as a Missouri species of conservation concern.

I knew this would be a difficult ID Challenge and am quite impressed that at least a few people figured out at least the correct genus.  Tim Eisele scored 8 points in this challenge to not only take the win but also move way up into a 3-way tie for 4th place in the overalls.  Ben Coulter continues to be Mr. Consistency, earning 4 points for 2nd place and retaining his overall lead by an almost insurmountable margin (see what happens when you play every game!).  JasonC beat out the other contenders for the final podium spot on the basis of a bonus point, but the hot contest continues to be the battle for 2nd place overall.  Janet Creamer still holds it at 14 pts, but there is a veritable gaggle of contenders nipping at her heals – the next few challenges could be interesting.