A thrips is a thrips… 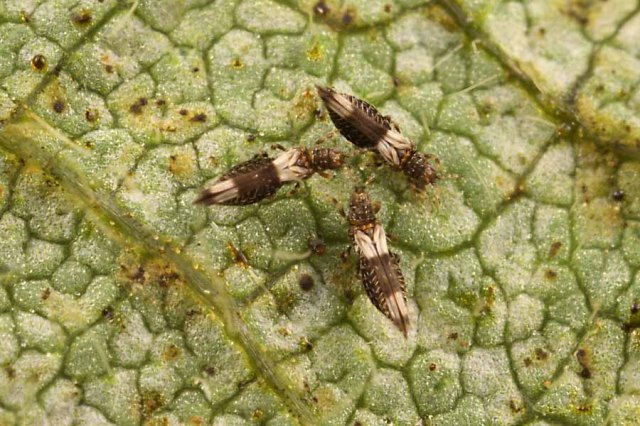 The critter in ID Challenge #6 is, as most surmised, a thrips¹, and although the black-and-white banding of the elytra make the predaceous “banded thrips” (Aeolothrips sp. of the family Aeolothripidae) a logical ID choice, the species in the photograph is actually the phytophagous “bean thrips” (Caliothrips phaseoli of the family Thripidae).  The individuals in that photo and the additional photos shown here were encountered in several soybean fields during my visit to Argentina last week.  The species seems to be having a bit of a population surge on soybeans in the Humid Pampas – Argentina’s main soybean growing region – due to the dry conditions they’ve had as of late.  Their short life cycle (egg to egg in 2 weeks) and preference for generally protected lower leaf surfaces, along with the lack of any registered chemical insecticides labeled for their use on soybean, makes control of this insects especially problematic.

¹ Yes, that’s “a thrips” – not “a thrip” (similar to deer, species, sheep, etc.).  Personally, I’ve always had trouble with singular use of this definitely plural-looking word – it must be the “s” at the end and the completely natural sound of the word “thrip” in singular use.  Then again, one “specie” doesn’t sound right, so who knows?  At any rate, I’ve managed to force myself to say “a thrips” (although I still wince a little bit inside whenever I do).

Thrips are tiny – the adults in the above photo (only slightly cropped) measure no more than ~1 mm in length, testing the limits even of my MP-E 65mm 1-5X macro lens at full magnification.  There are some interesting features about the morphology and life history of thrips – namely their “rasping-sucking” mouthparts and life history that seems somewhat intermediate between the incomplete metamorphosis exhibited by other exopterygote insects (egg, nymph, adult) and the complete metamorphosis of the endopterygotes (egg, larva, pupa, adult).  Thrips actually have only a single mandible (the other aborting development during embryogenesis), which they use to “rasp” a hole into the plant tissues upon which they feed.  The remaining mouthparts then form a sort of siphon, that is used to imbibe the liquids that accumulate within the hole.  This seems to represent – at least functionally – an intermediate step in the evolution of the true piercing/sucking mouthparts exhibited by other hemipteroid insects.  Life history-wise, only the first- and second-instar nymphs (2nd photo above) feed, the third- and fourth-instars becoming quiescent stages termed the propupa and the pupa, respectively.

Reader question: I presume the shiny, black globs on the hairs of the plant are fecal deposits, but why are they placed as such? Does it help avoid spoilage of the leaf feeding surface – I’m not aware of any other insects that are so fastidious (except perhaps ants). Maybe there is a defensive function? I’ve searched and found nothing about this, so please let me know if you have any insight.

There seems to be some difference of opinion regarding the actual species name for these insects.  Most applied economic literature dealing with thrips in soybeans calls these Caliothrips phaseoli – a widespread species occurring in North, Central, and South America.  However, a number of references (both economic and taxonomic) recognize South American populations as a distinct species, C. brasiliensis (or C. braziliensis, depending on the source), based on the solid dark rather than medially lightened elytral band.  I also found some references that seem to regard C. phaseoli as s a synonym of C. fasciatus (although this comparison at Pests and Diseases Image Library seems to show distinct differences in abdominal sculpturing between the two species).  I’m going with C. phaseoli over C. brasiliensis based on a checklist of Brazil Thysanoptera (Monteiro 2001) and the Argentina checklist at the World Thysanoptera website, and the general lack of mention of C. fasciatus as a pest of soybean in Argentina in the literature also makes me go with C. phaseoli.  Congratulations to Ben Coulter, who wins this challenge with a clean sweep of the ID and host plant, and to HBG Dave, whose 4 pts moves him into the lead in the current BitB Challenge session.

7 Responses to A thrips is a thrips…