My plan to retrieve beetle-infested wood in Oklahoma’s Glass Mountains has morphed from a quick stop to an all-morning affair, and by the time I loaded up the bundles it was well past noon. Fortunately, my next planned stop—Alabaster Caverns State Park—was only about a 90-minute drive, meaning I would still have plenty of time to give the area a good look. Unlike the Glass Mountains, with its gypsum-capped, flat-topped mesas rising above the surrounding landscape, Alabaster Caverns is level ground fissured by deep, rugged canyons that have eroded through the gypsum cap into the soft, underlying red clay. Nevertheless, both sites are part of the same Gypsum/Red Hills geological formation, so their associated flora and entomofauna are also similar. It was during my original visit to Alabaster Caverns back in 2009 that I found robust populations of Cylindera celeripes (Swift Tiger Beetle), and in October of the following year I discovered its previously unknown larva. My originally intent in coming here this time was to look for Cicindela pulchra (Beautiful Tiger Beetle), but since I had failed to find this species in the Glass Mountains I had little optimism that I would find it here as well. Still, it’s a beautiful park and I was anxious to see some of the canyon areas that I had not explored on previous visits, after which my trip would take a turn to the south.

As I expected, no amount of searching on the flats above showed any evidence of C. pulchra, and I saw pretty much the same assortment of beetles visiting the yellow-flowered Heterotheca stenophylla (stiffleaf false goldenaster) and Gutierezzia sarothrae (broom snakeweed) blooming in profusion that I had seen on Day 2 at Gloss Mountains State Park. Since I had neglected to photograph the gray blister beetle (family Meloidae, genus Epicauta) that I was seeing so commonly the day before, I decided I should go ahead and take advantage of the opportunity while I had it. As I mentioned in my Day 2 post, these beetles were seen almost exclusively on Gutierezzia, and shown below are two of the better photos that I ended up with. 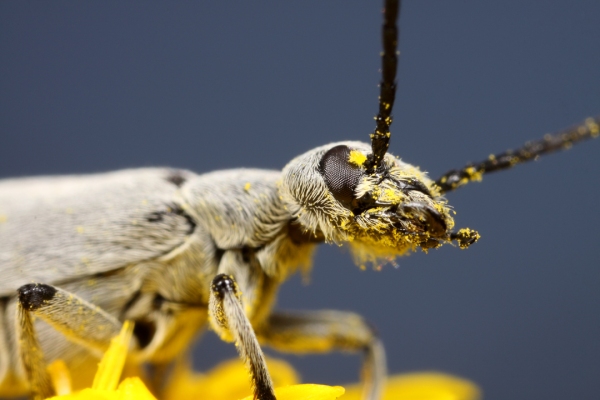 Mouthparts at 3X—love that pollen!

Another species that I saw very commonly were tiny little beetles feeding exclusively on the Heterotheca flowers. Measuring less than 5mm in length, a majority of flowers had at least one of these small gray beetles, and sometimes as many as four or five. Just based on appearance I suspected they represented something in or related to the soft-winged flower beetles (family Melyridae), and in fact they are a dead ringer for the species Listrus senilis(compare to these photos of the MCZ type specimen). This species seems to occur abundantly throughout the Great Plains (Mawdsley 1999) as far south as Texas (BugGuide). The small size of these beetles made them much more difficult to photograph, so my ‘keeper’ rate was lower than for the Epicauta beetle, but a few turned out okay:

The most significant find of the day, however, was also the most unexpected—I saw numerous individuals of an Acmaeodera jewel beetle feeding on the Heterotheca flowers. Why is this so unexpected? Because throughout most of North America members of the genus Acmaeodera are almost exclusively active as adults during spring and early summer. Those occurring in southeastern Arizona are found more during July and August, a result of the summer monsoon season, but truly fall-active species are limited to a few occurring in the Lower Rio Grande Valley of south Texas. When I saw the first one I presumed it was a late season straggler, but then I saw another, and another. It was clear by their numbers that now is their activity period. I do not know what species they represent, but I took numerous photos and will post them once I have made an identification. It remains to be seen whether this is an unusual habit for a known species (more likely) or a previously unknown species (less likely, though new species of Acmaoeodera continue to be discovered routinely in the U.S.)—stay tuned!