Last year during my extended work stay in Argentina, I was able to slip away from my duties during the first week of April and spend some time in the city of Corrientes in the northeastern part of the country. The city is one of my favorites in Argentina, but what I love most about it is its convenience as a base camp for exploring some of the habitats in the Grand Chaco ecoregion of northern Argentina. One day I had a chance to visit Chaco National Park about 100 km northwest of the city, site of some of the last remnants of the great quebracho forests that once covered much of northern Argentina. The forest preserved at Chaco NP takes its name from the quebracho colorado chaqueño (Schinopsis balansae) trees that dominate it, standing in defiant contrast to the vast, hot sea of cotton fields and mesquite fence-rows that surrounds it. While hiking a trail through the heart of the forest, I looked down to see a most impressive ant crawling across the forest floor: 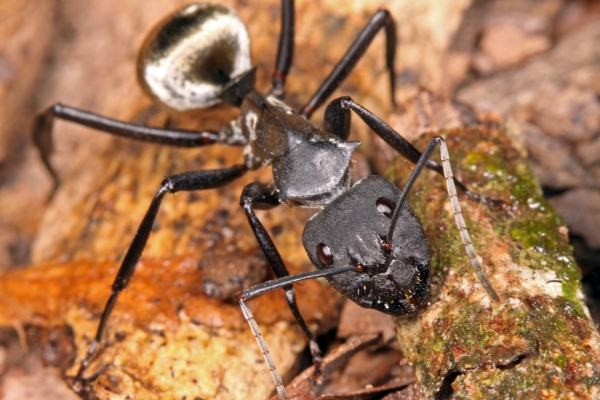 Because of its black color and the striking, silky sheen of the abdomen, I was immediately reminded of the Camponotus mus ants that I had photographed a year earlier further south in Buenos Aires. However, this fellow (er, fella…) was considerably larger than that species, and looking at the photographs later I was also struck by the acute spines at the humeral angles of the pronotum (in C. mus the humeral angles were obtuse) and the flattened legs. All of this combined to make it one of the most handsome ants that I had ever seen! I posted the above photo on my Facebook page asking for ID help, and James Trager quickly responded that the ant represents Camponotus sericeiventris, which translates roughly to “silky-bellied humpbacked” ant. Now there’s a common name I can get behind. 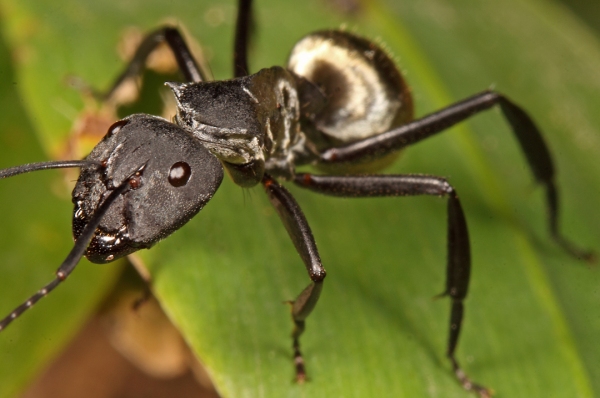 Of course, it turns out that I could have easily determined the species on my own using the characters I had already noted—primarily the acute spines. Googling “camponotus acute spines” retrieves as its first result a paper by Wheeler (1931) that discusses this ant and a newly discovered (at the time) cerambycid beetle, Eplophorus velutinus [now Euderces velutinus] mimicking the ant (Fisher 1931). As soon as I read Wheeler’s first paragraph I knew I had the right species:

Camponotus (Myrmepomis) sericeiventris, owing to its size, wide distribution and dense covering of silver or golden pubescence, is one of the handsomest and most conspicuous ants of the American tropics.

Apparently this ant is a popular choice of models for mimics in a number of insect groups. Lenko (1964) reported another cerambycid beetle, Pertyia sericea, as a mimic of C. sericieventris (the similarity of species epithets being no coincidence), and friend and colleague Henry Hespenheide has not only described a zygopine weevil, Copturus paschalis, from Costa Rica as a mimic of this ant (Hespenheide 1984) but also postulated mimicry by Apilocera cleriformis [now Euderces cleriformis] and three other species of Cerambycidae collected by him in central Panama. Henry further noted mimics in the families Cleridae and Mutillidae and the fact that all of the beetle mimics of this arboreally foraging ant are themselves woodborers or predators of woodborers as larvae.

It is interesting that Fisher (1931), in his description of E. velutinus, made no mention of the mimicry, while Wheeler (1931) in his paper about C. sericeiventris discussed this in great detail. He further noted the diversity of cerambycids here in our North American fauna that mimic ants. These include species in the genera Clytoleptus, Euderces, Cyrtophorus, Tilloclytus and—most strikingly—Cyrtinus pygmaeus, our smallest species of Cerambycidae which occurs on dead wood among small ants such as Lasius americanus, and Michthisoma heterodoxum which resembles small Camponotus pennsylvanicus workers. I’ve not yet encountered M. heterodoxum, which seems restricted to the southeastern Coastal Plain, but I have beaten C. pygmaeus from dead branches and can personally attest to the effectiveness of their mimicry—some slight something about the way they moved made me question my immediate assumption that they were ants and caused me to take a closer look at them before I shook them off the beating sheet. I wonder how many times before that I collected this species without realizing it!

5 thoughts on “The “silky-bellied humpbacked” ant”