At the start of my recent Great Basin collecting trip, I found myself presented with a rather unique and unanticipated photographic opportunity. As I landed in Reno, Nevada, the then 6-day old Rim Fire was already well on it’s way to becoming the largest wildfire on record in the California Sierra Nevada. As acre after acre of the Sierra’s dramatic coniferous forest succumbed to the blaze, an enormous plum of smoke drifted northward for several hundred miles over eastern California and western Nevada, blanketing the area in a thick haze that turned the sun’s hot glare to a soft glow and limited visibility to under a mile. It was like a thick overcast foggy day, only without the cool, damp humidity. This was of little consequence to our business at hand—collecting beetles (although it did make pointless most attempts to photograph the area’s stunning landscape). At day’s end, however, a dramatic transformation took place in the sky as the sun sank lower and lower, turning to an increasingly red globe as it strained to shine through the ever thicker layer of smoke and haze. Then, for a few brief moments, the sun floated—a dark red globe under blood red skies—before the thick bottom layers of haze finally extinguished its fading light.

I’ve just begun trying to incorporate setting suns into my photography, having made to this point only a few attempts over Midwestern landscapes. I’m not really sure what gave me the idea, but I thought it might be fun to try incorporating the spectacular sun and unusual sky I was seeing as backgrounds in full-flash insect macrophotographs. Perhaps it seemed a logical progression from the natural sky background macrophotographs that I’ve put a lot of effort into perfecting this year. It was certainly a learning experience, but the basic principle is the same as it is for blue sky background—finding the right combination of camera and flash settings to balance flash illumination of the subject with ambient illumination of the background. The most difficult thing was, surprisingly, getting the sun in the desired position within the composition, as it does not appear through the viewfinder as the discrete ball that is seen in the photos. Rather, it appears as a large, amorphous, blinding flash that comes and goes as one pans across it, leading to a lot of guesswork regarding its actual position within the composition.

I gave a sneak preview of one of these photos in Sunset for another great collecting trip, and several of the photos I’ve shared since then have featured the remarkably colored sky in the background. Here are some other attempts that I was happy with: 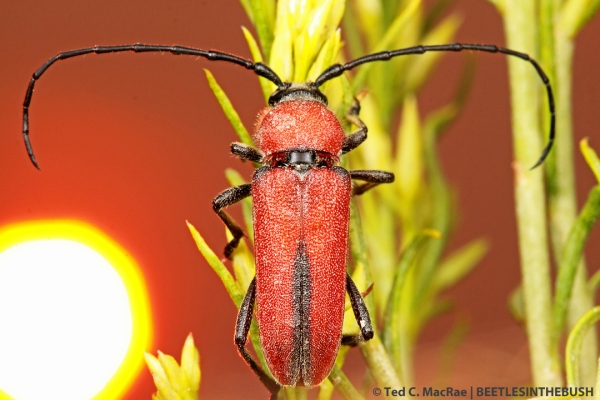 5 thoughts on “Under Blood Red Skies”