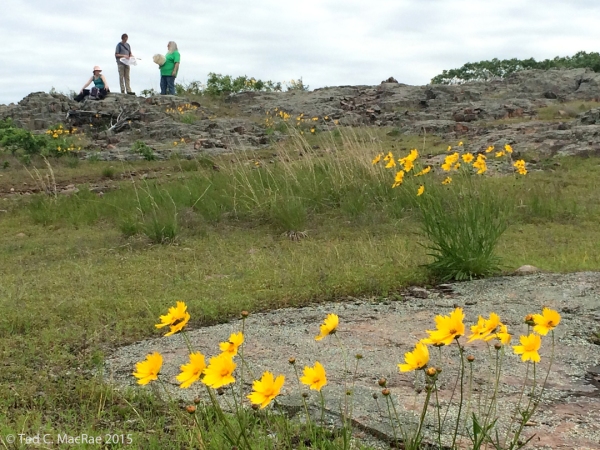 The WGNSS Entomology Group takes in the view of rhyolite glades from atop Hughes Mountain.

Each spring the Entomology Group of the Webster Groves Nature Study Society takes a field trip to one of the many natural areas outside of the St. Louis area. This year the destination was Hughes Mountain Natural Area, about 75 miles SSW of St. Louis in Washington Co. I especially looked forward to going there this spring, as my last visit to the area was close to 20 years ago. Despite the long absence, I vividly recalled the spectacular vistas from atop the mountain of rhyolite and the diversity of unique plants and insects in the igneous glades that flanked its slopes. When we arrived, we found the glades ablaze with spring wildflowers in full bloom, the most prominent of which was lance-leaved coreopsis (Coreopsis lanceolata). As one of the so-called “yellow composites”, coreopsis is a favored source of pollen and nectar for a variety of insects, including beetles and especially the jewel beetles that I find so interesting. 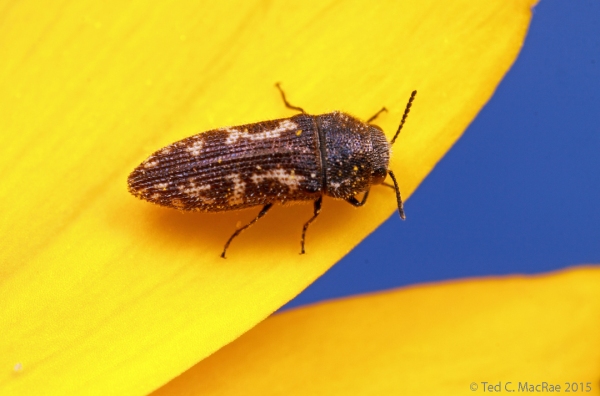 Species in the genus Acmaeodera are incredibly diverse in the southwestern U.S. (nearly half of the ~150 species/subspecies known from the U.S. occur in Arizona), where they are usually encountered on a variety of flowers. It is my opinion that the adult beetles mimic small bees, especially in flight by virtue of their fused elytra that do not separate during flight as in most other beetles and thus results in a profile resembling that of a small sweat bee (family Halictidae). The diversity of Acmaeodera drops off considerably in the eastern U.S., with only three species occurring broadly in the area. Missouri is a bit luckier than most eastern states, as two additional species found primarily in the south-central U.S. also occur here (MacRae 1991). One of these is Acmaeodera neglecta Fall, 1899. This tiny species (adults measure only 4–6 mm in length) is very similar to the much more common and widespread A. tubulus (Fabricius, 1801) (see photos here), and in fact its resemblance to that species is so great that it remained unreported from Missouri until Nelson (1987) recognized it among material that I had collected and sent to him during my early collecting days. Acmaeodera neglecta can be distinguished from A. tubulus by the elytra with slightly larger punctures and duller surface and the spots usually longitudinally coalesced into an irregular “C”-shaped marking on each side. I find this species most often in glade habitats.

Acmaeodera ornata (Fabricius, 1775) is more widespread than A. neglecta (although not nearly so commonly encountered as A. tubulus). This handsome species is distinctly larger than A. tubulus and A. neglecta, usually around 8-11 mm in length, and has a broader, more flattened appearance with a distinct triangular depression on the pronotum. The elytra have a bluish cast rather than the bronzy sheen of A. tubulus and A. neglecta, and the spots on the elytra are smaller, more numerous, and more of a creamy rather than yellow color. No other species in the eastern U.S. can be confused with it, although there is a very similar species (A. ornatoides Barr, 1972) that occurs in Oklahoma and Texas. I have encountered this species numerous times on a variety of flowers in Missouri but have never managed to rear it, and in fact larval hosts remain unknown with the exception of one very old (and unreliable) report of the species breeding in hickory (Carya) and black-locust (Robinia). 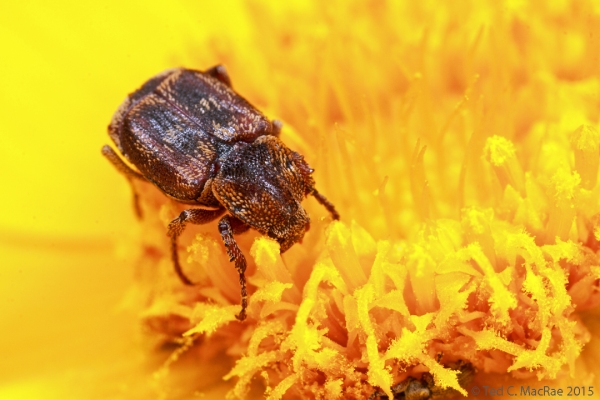 As a general rule, beetles in the family Scarabaeidae don’t visit flowers—species in the subfamily Cetoniinae being a significant exception. This tiny representative of the subfamily, Valgus canaliculatus (Olivier, 1789), is no larger than the Acmaeodera neglecta adult above by length, although the body is broader and strongly flattened. This species is a representative of the tribe Valgini, one of only two tribes in the family that possess dorsal and ventral scale-like setae (the unrelated tribe Hopliini, or monkey beetles, being the other) (Jameson & Swoboda 2005). It has been suggested that the setae might play a role in crysis or adaptive coloration, and even more interesting is the association of most New World species with termites. Eggs are laid in termite galleries and the larvae feed on the wood within the galleries, but it remains unclear whether the termophily is obligatory or the beetles are simply taking advantage of the stable environment and accessible food source offered by termite colonies. Like other species in the subfamily, the adults are fond of flowers; however, only male valgines visit flowers, using specially modified, brush-like mouthparts to lap up nectar. As far as has been determined, the males do not feed on pollen.

Note the flattened, scale-like setae covering both the dorsal and ventral surfaces as well as the legs.