During my February/March 2015 visit to Argentina, I had the opportunity to travel to west-central provinces of San Juan and San Luis with Federico Ocampo for a weekend of insect collecting. Up to that point most of my collecting in Argentina had been limited to the northeastern provinces (Chaco, Corrientes, and Misiones), so I was excited for the chance to explore a radically different biome. West-central Argentina represents a transition zone from the flat, wet, treeless plains of the Humid Pampas in east-central Argentina (Buenos Aires, Santa Fe, and Córdoba Provinces) to the massive Andes Mountains running along the western edge of South America. This area is home to the Monte, a desert biome characterized by volcanic sediments, piedmont plains, large mountain blocks and dry salt lakes. Conditions in the Monte are generally more hospitable than in the neighboring Atacama and Patagonian Deserts lying north and south of the Monte, respectively. As a result, the flora and fauna in the Monte is relatively rich and characterized by a diversity of shrubs, grasses, and cacti. 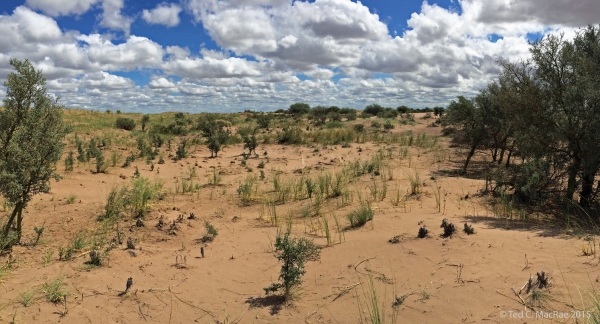 Of the several sites we visited in the area, the most remarkable was “Las Dunas de Encón” (the Encón Sand Dunes) in San Luis Province. Belonging to a larger system covering some 250,000 hectares—the largest in South America (and, thus, sometimes called the “Argentinian Sahara”)—the dunes are thought to have formed some 100–200K years ago as a result of dry conditions brought on by Quaternary glaciations. I find sand dune systems endlessly fascinating due to their unique and often endemic plants and animals and have visited many systems in North America (Bruneau, Coral Pink, Glamis, Great, Medora, St. Anthony, and others), but this was the first sand dune system I’ve had the opportunity to see outside of the U.S. Federico, a scarab specialist, shares that fascination and has, in fact, described a number of species in the scarabaeine tribe Eucraniini—endemic to South America—that utilize these very sand dunes (Ocampo 2005, 2007, 2010). He was hoping one or more of them might be out and about; I was hoping to see anything, really.

One of the first plants that caught my attention was a woody, fabaceous shrub that looked very much like what I would have previously called Cercidium, now Parkinsonia, and which after a bit of digging I conclude is likely Parkinsonia praecox. Woody, fabaceous shrubs in desert habitats are a sure bet to host jewel beetles, so I began paying special attention to each shrub as I wandered by. It wasn’t long before I saw a large, brilliant metallic green jewel beetle sitting on an outer branch of one of the shrubs—it was one of the most beautiful jewel beetles I have ever seen out in the field with my own eyes! I managed to catch it, and over the next few hours I collected not only several more of this species but also several individuals of an even larger, more somber-colored species. I was able to identify them as Lampetis baeri (Kerremans, 1910) and L. corinthia (Fairmaire, 1864), respectively, when I compared them to material in the collections at Fundacion Miguel Lillo, Instituto de Entomologia, Tucuman, Argentina [IFML]) during my visit there the following week (see photos below). 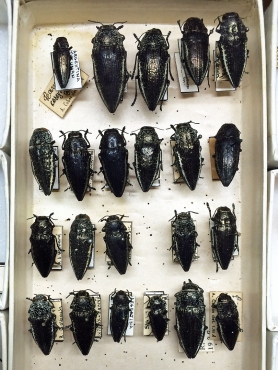 As a jewel beetle enthusiast, you would think that was the highlight of my day. In fact, the fun had only started. For a time after our arrival, Federico pointed out burrows likely made by eucraniine adults, but we didn’t see any evidence of activity at first. It wasn’t long, however, before we found the first adult—a fine Eucranium beleni Ocampo, 2010, the largest of the three species occurring at this site (about the size of our North American Deltochilum). One of the more obvious features of eucraniines is their enormously enlarged forelegs and pronotum to hold the musculature required to carry—that’s right, carry!—provisions to the larval burrow (in contrast with the more commonly seen habit among members of the subfamily of using the hind legs to push provisions to the burrow). This unusual morphology gives these beetles not only an amusing, shuffling gait but also a rather comical method for turning themselves upright (as seen in this video narrated by Federico). There are other dung beetles that pull, rather than push, larval provisions (e.g., Sisyphus spp., which stand on highly elongate hind legs and walk backwards while pulling the dungball), but eucraniines seem to be the only ones that actually lift provisions off the ground to carry them. In the case of E. beleni, this involves carrying pieces of dung with the forelegs held out in front of the head while walking forward on the middle and hind legs (Ocampo 2010). I didn’t get to see that behavior with E. beleni, but I did see it with one of another of the eucraniines we found that day (see below). In the E. beleni photo below, note the brushy middle and hind tarsi—an adaptation for walking on loose sand. 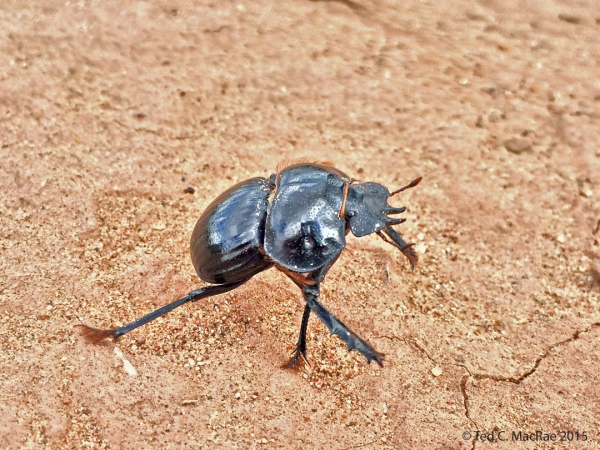 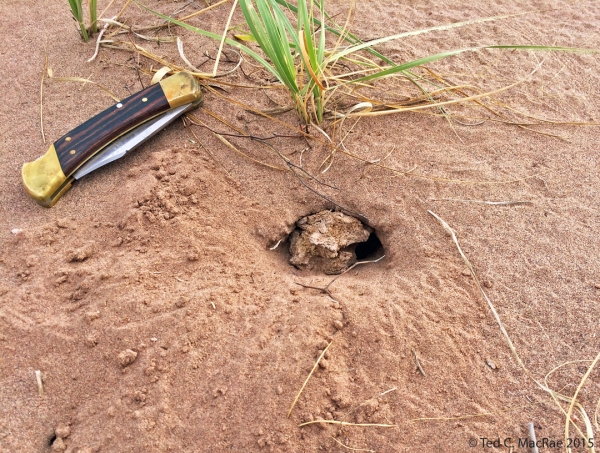 The second species in the group that we encountered was Anomiopsoides cavifrons (Burmeister, 1861). This species is much smaller than E. beleni (about the size of a large Onthophagus), and unlike E. beleni—and, in fact, most other dung beetles—the larvae of A. cavifrons develop on plant matter rather than dung. Both males and females provision the larval burrows with pieces of plant debris that they pick up with their front legs and carry back to the burrow while walking on their other four legs. This rather amusing video shows a male bringing a piece of debris back to his burrow, then exiting to find and retrieve another piece of debris to bring back to the burrow. The molar region of their mandibles is heavily sclerotized for masticating the plant fibers in preparation for the larvae. There are a couple of other species in the tribe that opportunistically include plant matter in their diet, but A. cavifons seems to be the only one known to utilize dry plant matter in desert habitats almost exclusively (Ocampo 2005). Anomiopsoides cavifrons was far more abundant in the dunes than E. beleni, and by early to mid-afternoon they were encountered with such regularity that I stopped even looking at them. 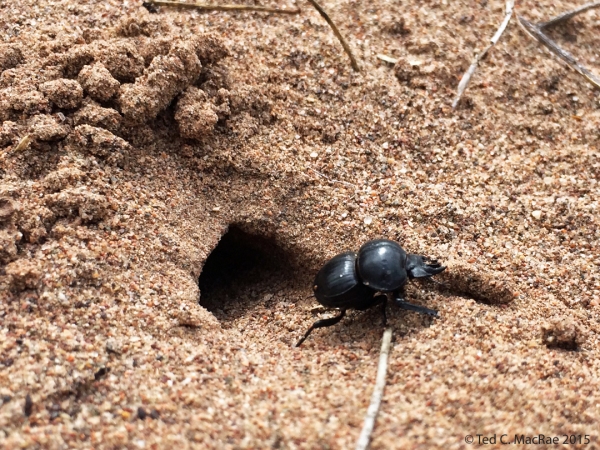 We also were fortunate to see a few individuals of the third species known from these dunes, Anomiopsoides fedemariai Ocampo, 2007. This species is intermediate in size between the extremes represented by E. beleni and A. cavifrons and utilizes pellets of the plains viscacha (Lagostomus maximus), a species of rodent in the family Chinchillidae, for food (Ocampo 2007).

2 Responses to Fun with eucraniines!