Skulls on my desk

Even though I am a scientist working in an organization with hundreds of other scientists, I can lay claim to one true uniquity—I am the only one I know of that has a skull on their desk! Six, actually. They’re not real (sadly), but their impact on most first-time visitors to my office is no less amusing. Typically the first question is, “What are those?”—to which my standard reply is, “Those are former colleagues with which I’ve had problems.” Maybe that is a little mean, but it usually gets a laugh (sometimes nervous). Hey, if somebody doesn’t understand my sense of humor, they’ll have to learn sooner or later.

¹ In anthropology, most of these would actually be called “crania” (skull minus associated mandible) rather than skulls. We can be less pedantic here.

I am, of course, talking about my collection of hominid fossil replicas. Yes, I am an entomologist, but I’ve also had a lifelong fascination with paleoanthropology and human evolution. Actually, I think my broad interest in multiple disciplines is rather typical of those who are drawn to the natural sciences, so it surprises me that there aren’t more scientists where I work with a skull on their desk. After all, this was a common practice among ancient scholars as a reminder of their mortality. My reasons for having skulls on my desk are less philosophical—I just like having replicas of some of paleoanthropology’s most important fossil hominid finds. They are icons of a subject that couldn’t be more relevent—our own origins. Just as nothing in biology makes sense except in the light of evolution, nothing in human society makes sense except in the light of human evolution. The skulls are a reminder of not just who we are, but why we are.

The “Taung Child” is thought to be a 3-year-old child representing Australopithecus africanus (which means “southern ape of Africa”). Discovered in 1924, it was the first hominid fossil discovered that, while definitely not a member of our own genus, could still be argued as somewhat human. Nevertheless, it would take another 20 years—once other, adult, specimens were discovered in southern Africa—before A. africanus would begin gaining acceptance in the scientific community.

The significance of the Taung Child was that it provided fossilized evidence of upright, two-legged (bipedal) walking much earlier than expected. Up to that time, it was believed that humans began to walk upright only after they had developed a large brain. Robert Broom, upon arriving in South Africa in 1936 and seeing the Taung Child for the first time, is said to have knelt at the edge of the table and exclaimed, “I behold my ancestor!” It is now thought that A. africanus represents southern African descendents of A. afarensis from east Africa but is not in the direct lineage leading to modern humans. Nevertheless, the Taung Child remains an iconic hominid fossil, especially given the suspected circumstances of its death—attacked and killed by an eagle! Puncture marks at the bottom of its eye sockets resemble those made by the talons and beak of modern eagles, which are known to attack monkeys in Africa today. The skull was also found among eggshells and a mixture of bones from other small animals that could have been preyed upon and show damage resembling that made by modern eagles.

Discovered in 1948 by Robert Broom, this nearly complete adult A. africanus cranium actually served to convince scientists of the time that the Taung Child was not just a baby chimpanzee whose ape-like features had not yet developed. Broom named the new fossil Plesianthropus transvaalensis and hypothesized that she was a middle-aged female—thus the nickname, “Mrs. Ples.” The fossil is now regarded to represent the same species as the Taung Child, differing chiefly in the adult character of prognathous (forward projecting) jaws, and is also now thought to have belonged to a sub-adult male.

I had the good fortune to see the actual fossil in person on a private tour of the Transvaal Museum’s “Broom Room” during a trip to South Africa in 1999. I wrote about that experience in a guest post at Christopher Taylor’s Catalogue of Organisms titled, Origins – A Day in the Broom Room as follows:

As Dr. Fourie held the cranium for me to look at, I noticed the fossil was about 3.5 feet off the floor—about the presumed height for the species. I suddenly saw Mrs. Ples standing before me in life – a living, breathing being, not an animal, yet not quite human either. I may not have used Broom’s precise words, but I whispered something along those lines to myself as the slender, hairy virtual creature stood before me. The Museum Gift Shop was selling plaster replicas of Mrs. Ples, one of which now sits on the desk in my office. I think about that experience at the Transvaal Museum almost everytime I look at it.

While Robert Broom was excavating in South Africa, he recognized that the fossils he was finding represented two distinct morphs—a “gracile” form now encompassed by A. africanus, and a more “robust” form that he described in 1938 as Paranthropus robustus. SK 48, discovered by Broom and Robinson in 1952, was until recently the most complete example of this latter type. The term “robust” refers not to the size of the body, but rather the characters of the skull that include a prominent sagittal crest and robust zygomatics and mandible with large, thickly enameled post-canine dentition. These features provide extra space for chewing muscles and larger molar surfaces—adaptations linked to a powerful chewing complex designed for processing tough, fibrous foods. Paranthropus robustus appears to have been a dead end taxon, being the last of the robust australopithecines and having no apparent descendants. It seems to have been a contemporary of early representatives of the genus Homo—our genus—in southern Africa (tempting speculation on what might have happened to them!).

This was another of the fossils I saw first hand during my visit to the Broom Room, and the plaster replica purchased from the Museum gift shop sits alongside Mrs. Ples on the desk in my office. 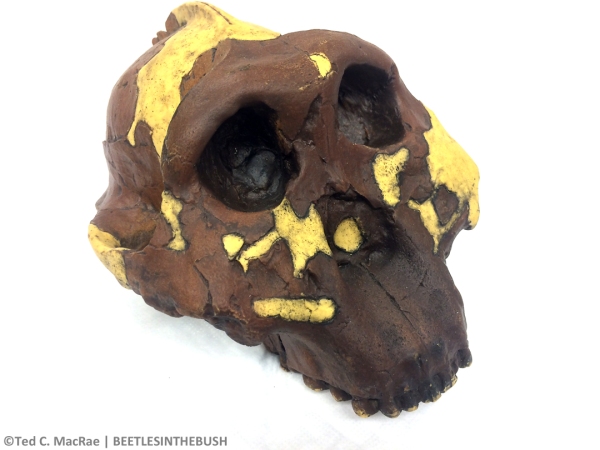 When it comes to fossil hominids, Olduvai Gorge in Tanzania is easily among the most famous of sites, and of the fossils found at Olduvai Gorge, OH 5 “Nutcracker Man” is easily the most famous. Discovered in 1959 by Mary Leakey, it was originally classified as a new genus and species, Zinjanthropus boisei, but is now accepted as a member of the genus Paranthropus. It is thought to represent a derived, “hyper-robust” species descended from P. aethiopicus (see “The Black Skull” below), which lived in east Africa a million years earlier. Like its congeneric contemporary in southern Africa (P. robustus), Nutcracker Man appears to have died out with no living descendents.

The discovery of Nutcracker Man (sometimes called “Zinj” in reference to its original genus name) brought the “robust” morph, typified until then by P. robustus, to a new level of robusticity: wide, outward-flaring zygomatic arches that projected forward of the nasal opening to form a dished-shape face, a large sagittal crest atop the skull, and a massive lower jaw. These traits no doubt allowed plenty of room and attachment for the huge chewing muscles needed for its diet. If features such as this aren’t enough to justify a nickname like Nutcracker Man, surely the megadont cheek teeth—up to four times the size of our own—will seal the deal! 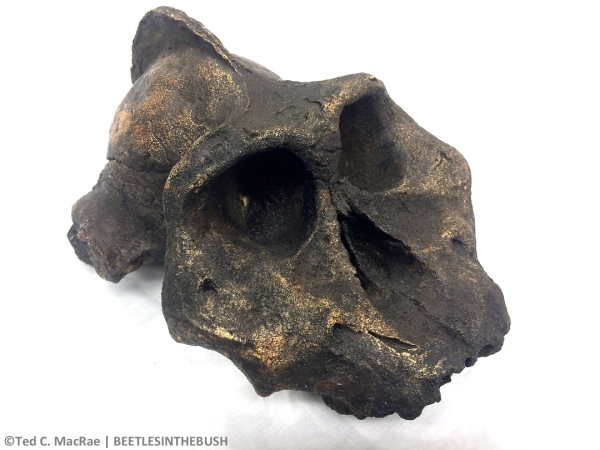 The “Black Skull” is actually one of the more recent hominid fossil finds. Discovered in 1985 by Alan Walker, it was originally classified as Paranthropus boisei—the same species as “Nutcracker Man.” However, the Black Skull is nearly a million years older than Nutcracker Man and apparently shares some characters with the even older Australopithecus afarensis (“Lucy” being its most famous member). All three of these forms lived in east Africa, though at different times, and the Black Skull was eventually deemed to represent yet another distinct taxon—Paranthropus aethiopicus (described some time earlier, but from only a partial lower jaw). It is the earliest known member of the genus, and the Black Skull remains the only known skull representing the species. Paranthropus aethiopicus likely gave rise to the later P. boisei in east Africa and P. robustus in southern Africa.

The Black Skull isn’t as robust as Nutcracker Man, but it is my favorite robust australopithecine fossil because… it’s BLACK! How cool. Actually the skull started out white, just like any other bone prior to fossilization, and developed its dramatic dark blue-black color as a result of the manganese-rich soil in which it spent the past two and a half million years.

The “Turkana Boy” skull is actually part of a remarkably complete skeleton excavated in 1984 by Richard Leakey and colleagues. Some regard Turkana Boy as a representative of Homo erectus, the first human to migrate out of Africa into Eurasia, while others consider the African populations to represent the distinct taxon, H. ergaster. One of paleoanthropology’s most contentious topics is whether modern humans evolved only from H. ergaster in Africa (the second “out-of-Africa”) or locally from H. erectus populations (including H. ergaster) throughout the Old World (“multiregionalism”). Molecular data seems to favor the former, but the latter has passionate adherents. Of all the skulls sitting on my desk, this one alone can be regarded as a possible near-direct ancestor!

Turkana Boy is not only remarkable by the completeness of its skull, but also the astonishing 90% coverage of the complete skeleton that results when bilateral symmetry is used to fill missing bone. Such completeness is extraordinarily rare among fossil hominids, and it has provided a wealth of information about the body size, shape, and growth rates of H. ergaster. The skeleton is thought to have belonged to a boy 12 or 13 years of age, measuring 5’3″ tall and weighing 106 lbs at the time of death. Interestingly, the pelvis reveals a greater ability to run than modern humans, while other bones more closely resemble those of Australopithecus. The long, slender body seems to be an adaptation to the hot, dry climate that existed in Africa.

Thanks to all who participated in ID Challenge #22. I have to admit how surprised and impressed I am about how many of you seem to be as interested in and up to date on human evolution as I. Congratulations to perennial BitB challenge master Ben Coulter, who takes the win with 63 pts. Dennis Haines (61 pts) and Mike Baker (60 pts) complete the podium, and honorable mentions go to Sam Heads (58 pts) and tandemtrekking (57 pts).

13 Responses to Skulls on my desk